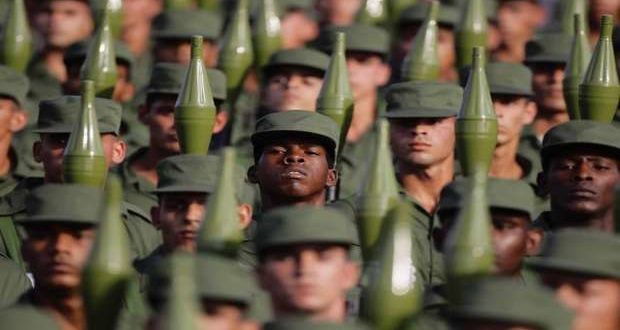 Ivan Garcia, 23 April 2016 — They work as a pair. Raciel, a black man almost six feet tall, with long arms and legs and a pock-marked complexion, is in charge of the fumigation equipment, while Yilsander, a light-skinned, pudgy man, carries a black bag and a clipboard, where he writes down the houses that have already been disinfected in the search ordered by Raúl Castro to minimize the presence of the mosquito that transmits dengue, chikungunya and zika.

Below a torrid sun, the two go house by house in the Havana neighborhood of Víbora. They wear olive-green pants, caps and shirts, the uniform designed by some sadistic tailor who ignored the tropical temperature of the island. And they have on horrifyingly heavy boots with steel tips on the toes.

Raciel, 19, is sweating buckets, and he smokes a cigarette below the doorway of a shop on Carmen Street, contiguous to the Plaza Roja, in the heart of Víbora. He’s a native of Cienfuegos, 300 kilometers to the southeast of Havana. Yilsander, 20 years old, was born in Mayabeque, a province that was improvised in 2010 by the Regime to prove how effective certain administrative and political transformations were.

“When I got to my unit (a tank unit in Managua, south of the Capital), my feet were full of open blisters,” comments Raciel. “The life of a recruit is very hard. The worst food, abuse from the officials, and they pay us 21 pesos a month.” “It’s shit, brother,” says Yilsander, and he wipes his face with a handkerchief soaked with sweat.

A month ago, 9,000 recruits, low-level officials, officials and police began participating in the fumigation and sanitation of the country. In spite of the heat and the 10-hour days, Raciel and Yilsander prefer this work to the tense sessions on military preparation.

“From six in the morning we have to be marching or training in the heat, with guns that weigh a ton. Or cleaning the tanks, arming and disarming the guns. It’s fucked up, because if Cuba is now friends with the Yankees, they’re not going to invade,” says Yilsander, the more loquacious of the two.

Too much money for an economy that is leaking on all sides. According to statistics, there are more than 85,000 armed men and around 6,000,000 men and women between the ages of 17 and 49 available for the armed forces in case of war.

The Revolutionary Armed Forces (FAR) encompasses three armies: western, central and eastern, plus a navy and an air force. Also, a battalion of elite troops and a youth army that performs agricultural and construction work in captive conditions and with ridiculous salaries.

The FAR and MININT (Ministry of the Interior) are the principal tools of social control in Cuba. They manage 75 percent of the national economy. The Council of State and the Politburo, as well as different ministries and first-rate business enterprises are commanded by active or retired soldiers, who have exchanged their olive-green uniforms for white guayaberas.

According to Daniel, an economist, the FAR devours “between 3.8 and 4.0 percent of the GDP. Perhaps more. And it generates expenses of billions of pesos and convertible money into maintaining armaments, military preparation and privileges. A FAR official earns around 1,200 pesos a month and has access to housing, recreation, clothing and food, all subsidized by the State.”

In a survey of 24 young people between 14 to 29 years old, they unanimously prefer abolishing Active Military Service. “Military service in Cuba should be professional and voluntary. Let a solider commit himself for five to ten years and earn a decent salary,” says Diosbel, a baccalaureate student.

For Onel, who is in his second year of studying telecommunications engineering, the disproportionate expense, the emigration from Cuba and the accelerated aging of the population are important elements in favor of designing a new strategy of defense.

“I don’t think it’s worth it to join the army for one or two years, for young people with the sufficient potential to become scientists, engineers, computer programmers. Before the new panorama, the FAR should restructure itself. It should essentially assist the population in the case of disasters or hurricanes. A small, professional armed forces, with no more than 30,000 men, would be the ideal for a country that is getting older, and which is in a permanent economic crisis,” adds Onel.

In the golden years of Fidel Castro’s revolution, the FAR had 1,000,000 men in arms. Cuba, a poor country, in the ’80s, for the first time in its history participated in two civil wars simultaneously in Ethiopia and Angola, sending 50,000 soldiers at its own expense.

“One day of war costs the United States millions of dollars. And Cuba spent 16 years in Angola. I’m convinced that this waste of resources, men and money was the beginning of the Special Period that the country experienced later,” said Daniel, the economist.

When the secret archives of the State pavilion are opened some day, we will be able to know the amount of money squandered on wars outside Cuban borders, on the preparation of foreign guerrilla fighters and on subsidies to Latin America and Africa.

In this twenty-first century, no one wants to attack Cuba. Military service should be abolished.