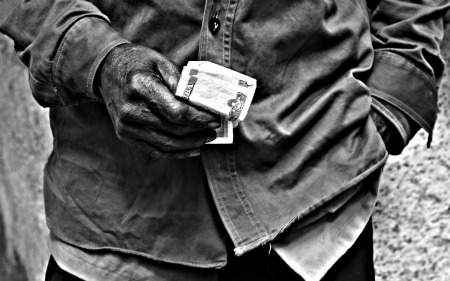 A wave of recently implemented layoffs sent an undetermined number of workers into the streets. Official data on the initial number of people laid off referred to something around a half million; later there would be a second round that would lead to a total figure of about a million jobs lost, to be identified through rigorous State analysis.

If this process had been called by its name — by what the world would call these “readjustments” — it would have been a scandal; even more so when the one to blame for the current situation is the State itself. But as often happens in Cuba, after many long faces and some show of displeasure, people end up accepting the “package” and venting their outrage at home, consoling themselves with tears and stored up hatreds.

Among those affected by the mass layoffs have been experienced and competent professionals. For them, like the rest, the options provided by the State were farm work or “self-employment” in just the few dozen trades allowed. Most people “available” — they invent terms here to avoid universal standards and statistics — have no experience in making land produce, whether it is vacant or overrun by marabou weed and available for leasing in usufruct, so most of them opted for self-employment.

So it was that an army of entrepreneurs (?!) began to take out licenses to try their luck in the uncertain world of business. The most fortunate could count on family or friends abroad to provide resources to invest, or advice and information about the operations of their businesses.

What these excited people didn’t know was that there were already some macabre minds who had planned everything in reverse. The communist gurus in charge of the necessary accounts had designed a system of taxes and controls in which the conditions of the country resulted in armed robbery.

This was explained with absolute clarity on several Roundtable TV shows, but the hopeful and enthusiastic did pay attention. “This is designed in such a way as to avoid the accumulation of wealth on the part of individuals,” was what they said on these programs.

This means that no matter how much effort and investment they put in, no one is going to turn their business into a success nor prosper much beyond what is allowed by decree for any humble Cuban.

The current tax system alone is enough to make you throw in the towel and give up. But things don’t stop there. The brave aspirants find themselves in a country designed from beginning to end to have an anti-business approach. More than fifty years of building this absurd philosophy would not be erased by magic, not even when one of its main promoters said in a speech that a “change of mentality” was needed.

Among other things, the raw materials for food and supplies to provide basic services continued to come from “illegal” sources, and the supplies promised by the government in the vast majority of territories never arrived. Thus, within a few months, the avalanche of tiny businesses and kiosks that initially flourished began to disappear. (Some owners keep their licenses to pay their social contribution and so they won’t appear unemployed, thus dodging the surveillance of the Sector Chief and being able to dedicate themselves to other activities).

Another element that de facto destroys any initiative, especially in small towns and rural areas, is the total lack of economic capacity among potential consumers. Thousands of people who have the need and desire to acquire products are lacking resources. The population is economically dead, consisting mainly of the unemployed, poor farmworkers, wage laborers, etc…

On economic issues, first there must be money in the hands of those who would consume, so that investors are found to take the risks, borrow, look for alternatives: no one will risk anything to sell to skinny phantoms and neutral onlookers. At the same time, it’s curious that journalists in the official media who reflect endlessly on the increase in license applications and the proliferation of small businesses that are supposedly “going full steam ahead,” have not said a word about this.

And the result is always the same: after the failures, exhausted hopes, and with no sign of any more rabbits to be pulled out of the dark hat of the government, people look even more desperately than before for ways to leave the country. Especially the young. The lines at the embassies are ever longer.

It’s a shame that so many prefer to leave rather than to stay and fight to change things. Although in the end it’s understandable: who wouldn’t want to go from being someone who needs help to being someone able to help?