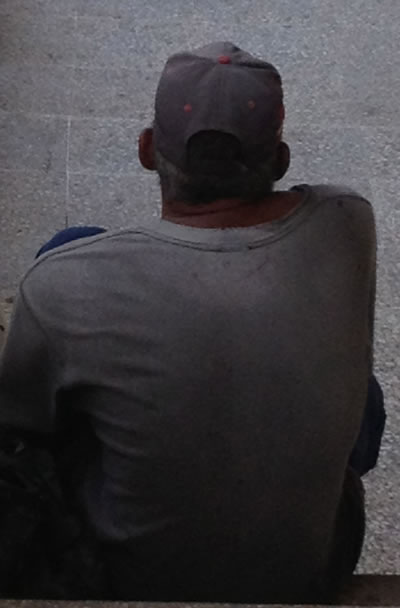 His own neighbor watches him. No one has confirmed it, he hasn’t read it any report, and he doesn’t have any friends in the police who have warned him. He’s simply not stupid. Whenever he opens the gate to his house, a white head peers out from next door. For every five times that he comes and goes, at least three times he runs into the old man who lives in the next apartment pretending to water the plants in the passage. The pots are overflowing, but the improvised watcher continues to add more and more water. Also he asks questions, a lot of questions, on the most imponderable topics: Um… what you have in that bag, where did you buy it? It’s been some time since you visited your mother-in-law, right? So he has his own private informer, an intelligence cell — of just one member — focused on his existence.

The informing neighbor spent Father’s Day alone. None of his children came by to celebrate with him. The truth is, no one ever visits him, other than two men with military haircuts. Because the old man is reputed to be someone whom even his own family doesn’t support. He is “more alone than the stroke of one,” say the other residents in the crumbling building. In the middle of the afternoon the watched knocked on the door of the watcher to give him a piece of cake. “So you can try it, my daughters brought it”… he said, savoring the victory of feeling satisfied and visited. A short flash of guilt shone from the eyes of the nosy one. By nightfall he was already back at his post, checking who entered and left the adjoining home.

In an unwritten, but very frequent, formula, most of the people involved in the betrayal of other Cubans also exhibit a great frustration in their personal lives. Not that every unhappy person becomes an informant for State Security, but failure is a breeding ground that the recruiters of informers take advantage of. With these individuals they develop shock troops willing to destroy others. In the neighborhoods, the extremists tend to be those with the most disastrous family and emotional lives. It’s not a rule… that’s clear… but it’s true more often than not!

To his neighbor, retired, resentful and alone, they have assigned the task to watch him. They have given him power over his life, an ascendancy that he enjoys and savors every day. The power to ruin smiles, to write reports that one day will haul off to prison this unbearably happy father and husband who lives on the other side of the wall.