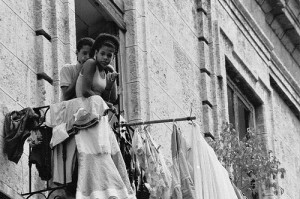 Racism in Cuba is far from being left behind. Forget the official ideology of a single nation without races. People do not live in compartments. Whites, blacks and mestizos get on the same bus. Go to the same schools. And live in the same neighborhood.

But they know the differences.. One of the most racist variants in the 21st century that persists in Cuba is in creating a family. Yoanna, a light skinned mixed-race college student, has a black boyfriend.

Her family is black. And they do not welcome the groom. They are very concerned stability and seriousness of the relationship. Especially the future. And the likely children.

“My family is concerned, they say I have to delay’. My mother married a white man. And they want this to continue’, having children with whites. I won’t lie, I’d rather not have to deal with the nappy hair of a little black girl. And although I really love my boyfriend, I want to form a family with a white man,” said Yoanna.

I won’t make this into a long story. We know the past. Centuries of slavery. Being nobodies and despised by the color of your skin. When Cuba became emancipated in the racial aspect, it was only in appearance.

In Gothic letters it was enshrined in the Constitution that all Cubans, no matter what the color of their skin, were equal. Not so. Blacks and mestizos are left at a disadvantage.

They came out of slavery with their belongings in a duffel bag and not a penny to their names. For decades, they have been called the ugliest. They have the worst living and working conditions. This lack of stability, bad housing and little money, has limited the number of blacks who go to college.

Also the marginal conditions in which they live has fueled crime. 88% of prisoners in Cuba are black or mixed race. Therefore, when designing the future, young blacks and mixed-race people dream in white.

Marrying a white woman or white man is the plan of many. Or a light-skinned mulatto. To keep it going. “It’s like a ladder. A dark black person, who nobody sees, can not suddenly think to be equal to a white champion. It is step by step. First a dark mixed-race person. Then the children must marry to light mixed-race person, or if they are lucky, with a white person. Such is the picture to gradually whiten the family,”says Yoni, a 34-year-old mixed race man.

There are black and mixed race women who do not like their skin color. It shows at once. It straighten their hair and in fashion mimic the patterns of white women. Miriam, black, 22, goes every month for the hairdresser to get her hair straightened.

She spends a fortune on straightening creams and shampoos. She chooses her friends. She likes hanging out with whites and light-skinned people. “Blacks only talk about problems and difficulties. They’re always complaining. They’re out of control,” Miriam says bluntly.

State media does not address the issue at length and complexity. They put it aside. Pass over it. A broad spectrum of Cuban society sees black culture and history as folklore.

But in their homes, blacks and mestizos speak without taboo of the need to ’whiten’ the family. Having children with lighter skin what the parents propose, and what their children see as a goal.