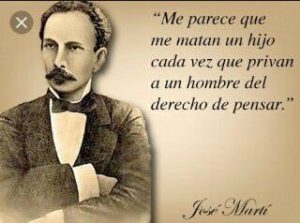 “I feel like they murder a child of mine each time they deprive a man of the right to think.” –José Martí

Somos+, Germán M. González, 29 January 2018 —  In Cuba, there is an urgent need to restore, rehabilitate, revive, reconstruct, rescue, all familiar terms in the party/government media. The sugar and coffee agro-industries, livestock breeding, the fishing and merchant marine sectors–all are barely surviving at less than 30% productivity. Also at risk are intangibles such as culture, the transmission of our history–in short, everything.

But for Cubans, both in and outside the Island, there is an urgent need to rescue José Martí, our Apostle, because his thought is proving today–in the shadow of our civic extinction and the battered state of our national pride–an indispensable guide.

They combine Martí with incompatible things, starting with his appeal that heads up the current Constitution: “I want the first law of our Republic to be the cultivation of Cubans towards the full dignity of Man”–negated when the supremacy of one small part of the society over this Republic, and the state, is proclaimed in Article 5–wherein additionally he is mixed up with characters (“…follower of Martí and Marxist-Leninist…”) who were antithetical to the ideology that can be noted throughout his entire body of work. The following maxims are representative examples:

A Constitution is a living, pragmatic law that cannot be constructed out of ideological elements. José Martí Complete Works, v. 9, p. 308.

On the “candidacy commissions” during “elections”:

On considering Marxism-Leninism to be an exclusive ideology:

To know diverse philosophies is the best way to free oneself from the tyranny of some of them… Op.Cit., v. 15, p. 91

The right of the worker cannot ever be hatred of capital: it is harmony, conciliation, the coming together of one and the other. Op.Cit. v.6, p. 275.

On the plans for massive scholarships:

There is great danger in educating children away from home, for it is only from parents that the continuous tenderness flows which should water the youthful flower, and that constant mix of authority and affection–ineffective, owing to the very domination and arrogance of our nature, but that both proceed from the same person. Op. Cit. v.5, p. 260

On the medical missions and emigration that break down the family:

On intervening in the internal affairs of and conflicts between sovereign nations:

Nothing so imprudent there is as to perturb with their own rancors–given that there are unfortunates who hold them–the peace of a foreign people: (…) Op. Cit. v.4, p. 137.

On the abrupt eradication of thousands of small and medium-sized businesses and farms:

On the absolutist State:

On the absolute and lifelong power guaranteed by the current political system:

All power that is fully and prolongedly exerted degenerates into a caste. With the caste comes the vested interests, the high positions, the fear of losing them, the intrigues (…) Op. Cit. v. 9, p. 340.

On the militarization of the economy and society:

What in the military sphere is a virtue, in the government sphere is a fault. A country is not a battlefield. In war, to command is to bring down; in peace, it is to raise up. No known edifice exists that was built upon bayonets. Op. Cit. v. 13, p. 129-143.

A Revolution is still necessary–that which does not make of its caudillo a President, that revolution against all revolutions: the raising up of all men of peace (…) so that neither they nor anyone else will ever see him again!  Op. Cit., v. 6, p. 360.

Let us rescue Martí–the true one has been hijacked–and we need him.