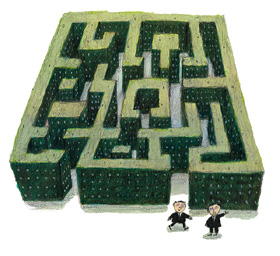 The year 2011 has begun and Cuba continues to be prey to a dilemma; a government of more than half a century, led by the same old men, who have given themselves another opportunity to correct their mistakes before leaving this world. So the president of the State Council, Raul Castro, expressed in his most recent speech.

History repeats itself. The Third Congress of the Cuban Communist Party, held in February 1986, started the historic stage of “correction of errors and negative tendencies”. In that time, the communists were focused on eliminating the tendency to imitate the Soviet model, principally the application of political and economic reforms that Gorbachev had established in the USSR, better known as perestroika.

25 years later, a new process of correcting the Cuban formula for socialism for the 20th Century has started. The redesign will probably be in the Sixth Congress of the Cuban Communist Party, scheduled to be held between the 16th and 19th of April 2011, when the 50 year anniversary of the proclamation of the socialist character of the revolution and the victory at the Bay of Pigs will be observed.

The interesting thing about this case is that they have nothing defined, despite affirming that they won’t go back to copying anyone. They are certain that they will not permit the free market as did the Chinese. In fact, the new intent is plagued with contradictions. They recognize that they turned the principle of state ownership of the fundamental means of production into an absolute, but they won’t allow the private to grow.

The veteran Cuban leaders are convinced that the biggest and most important error committed in the past was to believe that someone knew what socialism was and how to build it. However, the principal problem of the old guard isn’t the uncertain search for new formulas to redesign socialism — a la cubana — before the Grim Reaper cuts down their long lives. The mistake for which we all are paying is the stubbornness of maintaining a hard and unviable state capitalism.

In 2011, the sad thing isn’t that history is repeating itself, nor that they might recognize their mistakes after so much time in power, nor that they feel themselves the only ones capable of mending their faults. What is inconceivable is that they keep following the same policies that led them to failure.

They’re not even getting the foundations of the new attempt right. They allege that, despite that Marxist theoreticians have scientifically proven the system, the building of the new society in economic order is a trip into the unknown. However, they assure us that the guidelines of the policy for the next five years show the course towards the socialist future. Moral: not even they know where we are going.