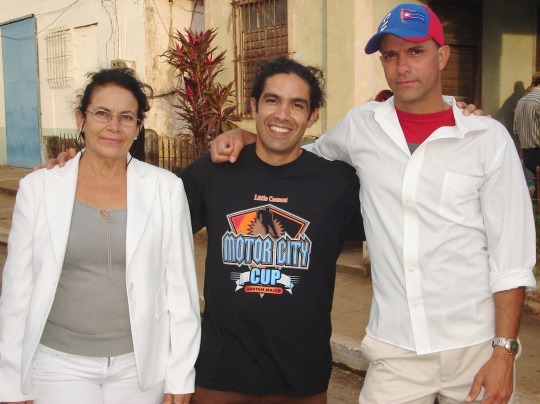 It leaves an empty space … my friend Alfredo goes into exile. In March 2003, that Black Spring, chaos erupted in his life. The son of Alfredo Felipe Fuentes, an opponent of the regime, and Loyda Valdes Gonzalez, Lady in White.

His father, proselyte, irreducibly dissenting, fell into the round of 75 opponents taken prisoner. His crime, as far as I could understand, was to have in his home an independent library and the have participated actively in the collection of signatures for the Varela Project.

State Security’s search of his home lasted over 7 hours. The lawyer who was in charge of the defense only had one hour, the time it took by car to drive from his home to the Court, to study for the first time a fat file inches thick.

Already in the Court, the room deliberately filled with people who had nothing to do with the case, selected for the single reason to prevent the several family members from being able to witness the trial.

The result of the summary trial: the prosecution asking for a sentence of 15 years imprisonment and the judge ultimately imposeing a sentence of 27 years, the third highest among the 75.

Leaving with his family is Alfredo the son, my friend from when we were young until now. An unconditional friendship, even when it came my turn to face the storm, he was at my side and assumed all the risks along with me.

In 2002 he signed the Project Varela petition and later other civic initiatives, including a public letter to Raul Castro. With his high regard for human dignity and indignation before any offense converted him, also, into a signatory of our Letter of the 300 workers, to the Minister of Health in November 2005.

A doctor with soul, poet, engraver of chimeras, hopeless dreamer, transparent and luminous spirit, an adamantine being. He leaves here others to whom they scream slogans, others who in the name of that Revolution try to legitimize barbarism; that authentic Revolution in which, despite everything, we continue to believe, that Revolution betrayed by so much simulation, raising of straw men, and opportunism that has offended and defiled this beloved land.

I’ll see you my brother. The future must be better!

Translator’s Note: This early post from Jeovany’s blog is translated and presented here as a reference point to the following post, Medicine in Cuba Today: A Series of Shortcuts and Scarcities, which was written by Jeovany’s friend Alfredo whom he speaks of here.