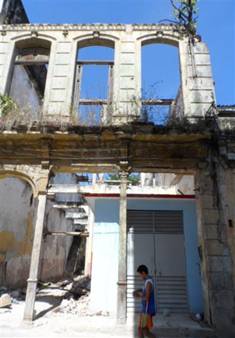 In the case of the national railway, the authorities in charge claim that its problems are due to outdated equipment and the lack of proper maintenance resulting from a lack of spare parts. The system has not been updated in more than fifty years. As a result the No. 1 train from Havana to Santiago de Cuba, which used to run daily, now only makes the trip every three days. For the last eight years the Havana to Holguin train has not run at all.

Those that are running do so at reduced speed and with a fewer number of train cars. When the air conditioning in one of the French-made train cars breaks down, it remains permanently of service and passengers must resort to opening tiny windows instead. The system also suffers from organizational problems and widespread indiscipline.

For years the sizes of school uniforms sold at the beginning of the school year have not corresponded to students’ actual sizes, which have become much smaller to poor nutrition. Though the problem persists year after year, the ministries of education and industry have still not come up with a solution.

Camping, the only vacation option available to the average Cuban, does not live up to expectations or its costs. Camping facilities are run-down, the food is of poor quality and badly prepared, amenities are minimal and the available services leave much to be desired.

Drinking water is in short supply in the suburb of Villa Panamericana near the town of Cojimar. Planners did not take into account the fact that project’s cisterns relied on gravity and that the supply came directly from the tank itself, so of course it cannot reach the third, fourth or fifth floors of the town’s existing buildings.

One might think that this string of calamities is directly related to those provide these services. That assumes that these people do not know how to do the work or simply do it badly. However, in spite of a constant turnover of directors, administrators and personnel, things are no better. One would then have to assume that it is the system itself that is not working.

Neither classic nor actual socialism has worked in any of the countries in which it has been tried. The evidence is plain to see. In Cuba it has never worked, not in the past and not in the present. I think this will also be the case with “prosperous and efficient socialism.” At least that is how I see things so far.