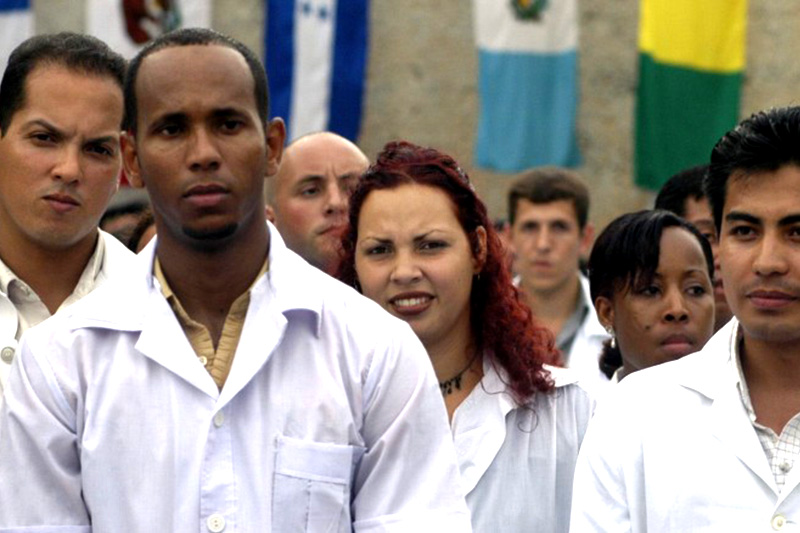 Somos+, Kaned Garrido, 21 September 2015 — Cuban doctors have sustained everybody’s health for decades. The reason Cuban medicine has such prestige is because of the incredible effort of its professionals. The same as Cuban teachers, doctors earn very little. They spend years and years at their careers, and later in service to the country.

That’s the reason we have quality education and healthcare in Cuba. Not by some magical social politics nor because we want to take money away from the rich, like Robin Hood. It’s because of dedicated professionals and the rest of the Cuban workers who finance the expenses, all with pathetic salaries.

But it’s not easy work to sustain such a good health service in a country with such an unproductive economy. This burden ends up falling on the shoulders of Cuban doctors. Some choose the path of the missions in the Exterior to earn a little more. Others prefer to leave the island. So we need to know what they think.

These are the opinions of doctors who presently work in Cuba.

Doctor R. M. earns 1100 pesos (44 CUC, or about US$50) a month. Her specialty is general medicine. She describes her work conditions like this:

“Since that is the frosting on the cake, I work in the Julio Trigo López Hospital, one of the worst in terms of structure and management. Some months ago they did a restoration. It happens that every time they say a room is finished, weekly, the room still looks like it did originally because of the poor work that the construction crew does.

“Every day we doctors have to put up with leaks, humidity, heat and a big lack of hygiene. In addition, we have to deal with large shortages of work materials and we almost have to be magicians. To work without gloves is like being in a war without a gun. Sometimes even alcohol and needles are lacking, not to mention material for sutures. The worst of everything is that we complain, we demand, we bring up our problems to the highest levels, and nothing happens.”

Why do you go on missions?

“I have already gone on several internationalist missions, or like I call them: “lifesaving missions,” and not exactly because of the work we do. Look, I’m proud of being a doctor, and saving lives is the best recompense for a doctor. However, these missions are much more for us. These are opportunities to be able to earn something, to furnish all our houses and be able to put a little money in the bank. Otherwise, it would be impossible with our salaries.”

Why do you stay?

“Why I stay is something I’ve asked myself several times. However, I haven’t done it out of fear, fear that I would go somewhere and not be able to perform my profession outside Cuba. I know about many doctors who left and never could return to the profession. However, I congratulate those who do it; I congratulate them for their courage. This decision is owing to the many deficiencies we have as professionals and as people. But above all for the need to be free. But basically it’s that need.”

Dr. Jorge M. H. is a specialist in neurosurgery in the Hospital Universitario Calixto Garcia. He earns 1450 pesos (58 CUC, or US$70) and does four inspections a month. He describes his work like this:

“This hospital is one of the oldest in Cuba, and its structure is atypical. There are 203 wards, and the majority don’t have elevators. Because of construction problems, very few specialty rooms are completely authorized, and they don’t fit all the patients. So neurosurgery patients can be in a surgery room or a dermatology room. And when you visit your patients in the morning, you have to travel several kilometers. In the operating rooms it’s normal to have problems with the air conditioning, which is so necessary in these cases,and a reason for postponing the scheduled operations. The instruments that are used to do a craniotomy are as obsolete as the technique itself.”

Why do you go on missions?

“In my opinion I can’t say that it’s not done for humanitarian reasons, but you shouldn’t deceive yourself. Many of us go out of economic necessity, the possibility of a living and a salary in CUC that they hold for us in Cuba. Later we can buy things with a 30 percent discount. These are sufficient reasons for not thinking about it even for a second when there’s an opportunity for travel.”

Why do you stay?

“Many of us, upon leaving for the first time and knowing the reality of other countries, so different from what they tell us here, feel deceived and prefer to not go back. Without fear of being wrong, I tell you what I told you before. There are strong economic and political reasons for staying.”

As a movement, as young people and as Cubans, we have the duty to confront this problem and to offer solutions. We need an economic dynamism that sustains Cuban medicine. We need an open and clear debate about what is happening. To stop building castles of fantasy and understand that the benefits of the system should fall on the shoulders of the workers.

It’s clear that this isn’t a simple matter. We have a devastated economy and a demanding public health system. But we know that as a nation we can make it much better.