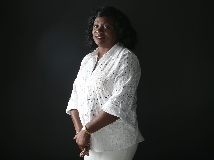 From Pieces of the Island: After Berta Soler’s emotional trip to Miami- the heart of the Cuban exile- she has continued to take the Cuban reality to other places with many exiles, such as New Jersey and now, Puerto Rico.  The following is my translation of a piece by Mario Alegre Barrios, published in one of Puerto Rico’s most famous newspapers, “El Nuevo Dia”.  It is a must-read interview with Soler:

Berta Soler, president of the Ladies in White, says that a social explosion in Cuba is imminent

When we said goodbye to each other two years ago, in Havana, neither of us thought that we would see each other again.  At least I didn’t.

The face of Berta Soler- cofounder and president of Cuba’s Ladies in White- now has another Light: her stare shines and draws a white smile which contrasts that solemn expression we met at the home of Laura Pollan, the headquarters of this group which, for the last decade, has been one of the fundamental fronts of resistance against the regime of Fidel and Raul Castro.

Visiting Puerto Rico since last Wednesday, today Berta continues the trip she started nearly two months ago and which led her- along with two other Ladies in White- to Brussels to receive the Andrei Sakharov Award which was given to the women by the European Parliament in 2005, acknowledging their struggle for human rights.

In the same way she gave that chat in the summer of 2011, Berta speaks in torrents, as if time was running out to speak about the reality of her country which has been under the longest dictatorship in the world (for more than half a century).

Read the rest of the interview here, at Pieces of the Island.