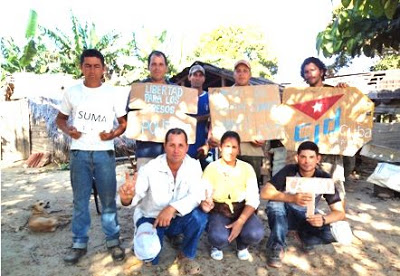 On Saturday April 20th in the afternoon members of the Free Peasants of CID welcomed a new activist, Vidal Pérez Barrios 23 years of age, from the El Gacho ranch in the municipality of San Juan y Martinez, in the province of Pinar del Rio.

The Free Peasants Committee was founded on August 20, 2010 and is aimed at strengthening cooperation between farmers in the area. The Committee helps with feeding school students, distribution of vegetables in community neighborhoods and contributes to the livelihoods of poor families.

In 2012, this opposition organization helped more than 34 families with food and collaborated with five daycare centers providing meats, vegetables and dairy products for the children, according to its President.

Rolando Pupo Carralero, President of the Free Peasants Committee, reported that the meeting began with a short introduction which reported on the work achieved in the past month and plans for the coming months.

The activist Andy Gonzalez thanked the newest member for joining the organization, and also mentioned the importance of continuing the effort with civil society in order to achieve a rapprochement between the NGOs and the people.

“This alliance has been outstanding in the support and development of the community and is a great proposal, but still not all farmers in the area are participating in the initiative,” said Diego Lazaro, a local resident.

Vidal Barrios, a new member of the Committee, ended the meeting by thanking his colleagues and highlighting their commitment to this cause, also confirming that they will continue to contribute to this noble work for the good of all Cubans.