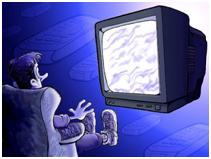 Jesus still believes that he should not have to pay off a debt for enjoying foreign television.

The restless Jesus Martinez approaches and asks them if they can help him. He was staring all over the place with his thick glasses while he whispered something about his grandmother being at the verge of a depression crisis. They had to pay a fine for the possession of a satellite antenna.

Jesuito, as they call him in his neighborhood, felt guilty. He had begged his grandmother so that they would ask their uncle, who lived in the United States, for money so that they could buy the equipment. Their relative also contracted the services of the satellite company, Direct TV, so that they receive television programs through a system of magnetic cards which provide a satellite signal, as well as an extension which allowed them to enjoy the shows in Havana.

In Cuba, foreign television programs are considered to be limited services and are mainly aimed at the tourist population, the diplomats, and certain people authorized by the Ministry of Information and Communications (MIC).

In an inquisitive tone he said, “it was the snitch from the CDR”, referring to the president of the Committee for the Defense of the Revolution. “The other day, my mouth slipped and I told him I had seen the boxing match with Yuriorkis Gamboa through cable”, Jesuito said. Martinez confessed to being a fan of the Cuban boxer who is now a champion in the United States.

The Official press considers such programs to be “avalanches of commercial propaganda which showcase the essence of capitalism” and they are classified as political. “In the case of Cuba, part of the programs received through that route are full of content which is destabilizing, interfering, subversive, and increasingly encourages the carrying out of terrorist activities,” assured a reporter from the Granma Newspaper.

Now, neither he or his grandmother had the nerves to ask their relative for 400 dollars to pay the 10 thousand peso fine imposed on them. “I work as a librarian, earning 375 pesos monthly, while my grandma receives a 215 peso pension, and our uncle sends us monthly remittances,” the 39-year-old man explained. “Where are we supposed to get the money to pay for the fine?” he woefully asks.

In Cuba, the average salary of a worker is 412 pesos. However, the installation of satellite antennas, as well as the reception and distribution of the television signal without a license, is considered a violation of the law which is punished, under provisions of the MIC, with a 1,000 peso fine for individuals and a 10 to 20 thousand fine for organizations or entities.

“I know that it’s illegal, that’s why I’ve cut out articles from the newspapers which deal with that subject, and each of them state that the fine can go up to 30 thousand pesos. In fact, there are various crimes which can be committed,” says Jesus while he shows an article written by the journalist Lurdes Perez Navarro, published in Granma newspaper on August 8, 2006.

Both the inspectors from the MIC who are in charge of applying the administrative norms and the official press have said on countless occasions that the amount of the fine ranges from 10 thousand to 20 thousand pesos for anyone who violates the law, whether they be individual citizens, organizations, or entities.

Jesus had the right to protest against the measure but the law only gave him 5 work days to present his appeal, and those days had now passed. Now, his only option is to have the authorities charge him the fine in monthly fees. Perhaps for the next ten years of his life he will have to pay off a debt simply for watching foreign television. “It’s absurd. If I tell anyone about it, they won’t believe me,” he concludes.