While we wait with growing worry for news of Angel, we share here this tribute dedicated to him by his close friend Camilo Venegas El Fogonero.

When Fatties Go on Hunger Strike

In Clandestinos, one of the Cuban films I most enjoy, there is a moment that I really like. It’s near the beginning. Dozens of young revolutionaries who remain prisoners in a jail in a dictatorship, decide to declare a hunger strike.

One of them, who is fat — they call him El Gordo — and who was played by Amado del Pino, is taking a shower when a decision is made. With his head still soapy, he looks at the camera and raises his index finger, “Hey, no, no hunger strike, better suicide,” he says.

Then, when those who were selected for the strike are transferred with their mats to another cell block, the fat guy tries to sneak. The group leader (Luis Alberto Garcia) persuades him and he says he can not resist: “Look, I have this support this,” answers el Gordo, and hefts his enormous paunch, “I have more than you.”

A cut puts the viewer in the dark night of the galley. All are in bed and hungry. El Gordo is joking with his companions and about to pronounce one of the most delicious speeches of Cuban film history:

“Pino, Pinito, what you doing now, bro, if the old guy shows up out there with a little plate or two…what’s more, with a bucket of soup?” he says, savoring it.

“A little soup with cheese, delicious. Mommy, throw me a bucket of soup, enough to go around. Enough to get our mouths dirty. You’re not messy when you eat? Ah, whoever doesn’t get messy isn’t enjoying it.”

“Gordo, for Pete’s sake, shut up,” his companion says.

“It’s so delicious to get messy, buddy!”

“Gordo, fucking can it. Stop, dammit!”

“Well fuck me,” he insists. “Here, at first I dreamed of women, but now I dream of tamales…!”

First, they throw a show. Later, the leader of the group goes and threatens to kill him if he keeps talking about food. 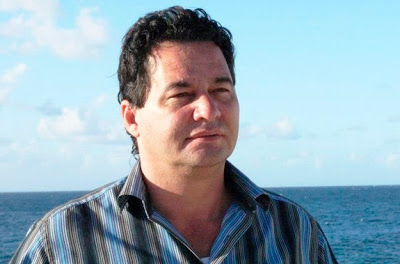 Through the same invisible threads that helped Antonio Gramsci to get his writings out of prison, this message came to me from a punishment cell in Havana, Cuba.

“To El Fogonero Camilo Venegas
“Love is not surrendured as long as I breathe. The pain and the injustice multiply. And I wake up happy.”