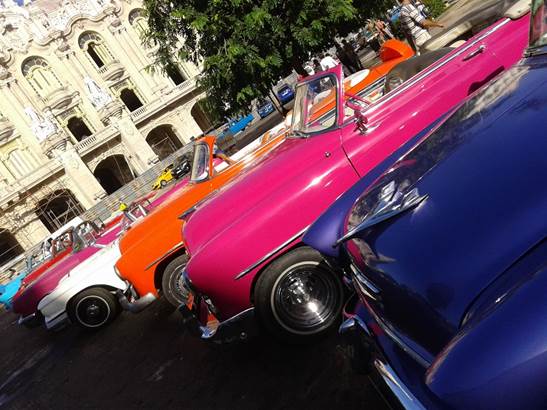 Rebeca Monzo, 4 August 2016 — Private transport has been making a comeback in our country. With an enormous stable of almendrones (old American cars), it has been steadily growing over the last thirty years due in essence to the deteriorating and ever diminishing state-run public transport system.

During all these years of totalitarian dictatorship, the number of buses in every province of the country has been decreasing due to poor maintenance and a shortage of spare parts, not to mention bad roads.

Additionally, given their extremely low wages, many transport workers and public-sector employees have turned to fixing and restoring American automobiles from the 1940s and 1950s, as they previously did with Soviet-built Ladas, as a means of providing economic support their families. Even many medical professionals ferry passengers around in their old cars in their spare time because the salaries they receive barely cover the costs of their most basic needs.

So why this new persecution of self-employed taxi drivers if they are the ones who are finally alleviating the critical transportation problem, one the state has not been able to resolve in fifty-seven years? After all, no one is putting a gun to their customer’s heads and forcing them to pay the going rate.

If the government — instead of spending so much money on political propagandizing and overseas proselytizing — had invested those resources on improving public transport, bringing down fuel and gasoline costs and lowering the exorbitant prices for spare parts, these taxi drivers would have been able to reduce their fares. It all comes down to supply and demand. So why not put an end to all this harassment by addressing the cause and not the symptoms of this social disaster?