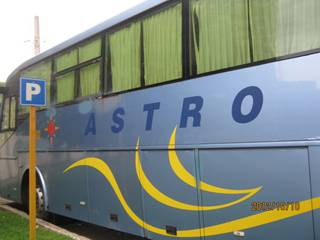 About a month ago, my friend, Mariana, her husband and her mom decided to go on a trip to Trinity through a tourist bus company called Astro. They were very excited about the trip and expected it to go very well since they had paid 132.00 CUP (Cuban pesos) for each person both going and returning. They were anticipating a very comfortable ride with amenities such as air conditioning.

The first stop was at the Mulles de la Coubre. At this stop, which was not part of the schedule, five people got on the bus and paid the bus driver directly. However, all the seats in the bus were already full so the extra passengers were forced to accommodate themselves in the aisle of the bus. The luxurious image that they had envisioned had already been disrupted. They were not sitting in comfort, but were cramped in the bus unable to recline their chairs.

My friends also noted that the bus driver would stop to pick up anyone on the side of the road who offered him money, because of this the bus began to fill up little by little. In front of Mariana there was a woman who was holding a huge bag against her body and she had nowhere to move. As they were arriving at Aguada de Pasajeros, the bus driver recognized someone he knows. He starts yelling and signaling for the acquaintance to notice him almost throwing himself out of the window. All of the sudden, he hits the breaks, parks, and gets out of the car. He was there for about half an hour conversing with his friend, while the passengers waited patiently inside the bus. Then the bus driver returned and the journey continued until they stopped at a Terminal, where they were serving pork sandwiches without any attention to hygiene; there were flies and abandoned dogs peeing on the table where the merchandise was kept. All the passengers who desired this meal got down to satisfy their appetites. Trucks pulled by horses and trucks from the 1950s waited for possible clients.

Exhausted and tired and after traveling for five hours they finally arrived in Trindad. The three of them swore not to return through Astro and for that matter never again. After enjoying themselves for a couple of days in this colonial city, they had to negotiate their return trip to Havana through a taxi driver who had driven some people to Trinidad. They were able to bargain for a fair price under the table. Their ride back was much more enjoyable and peaceful.