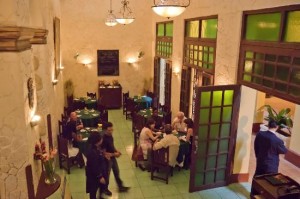 Laura is a Cuban woman who has lived in Spain for more than twenty years. She speaks like a Spaniard. She looks like a Spaniard. Her husband, children and grandchildren are Spaniards. But in spite of the passage of time and the distance separating us, she still considers me her best friend. Or so she tells me.

She is a little older than me, though we are both elderly. Nevertheless, we began planning a trip to Havana.

Because those times remain in our memory and form part of our experience. The adventure of visiting Havana — that beloved city of ours that continues to struggle for survival in spite of the neglect and apathy brought on by half a century of socialism — is something I just have to tell you about.

We got into an almendrón, a taxi fashioned out of one of those old 1950s American cars, in Séptima de Santa Fe, a coastal town outside of Havana. We asked the driver to drop us off at Galiano and Zanja streets, located in the very heart of the Cuban capital.

What we saw would impress anyone. At the intersection of these two streets is El Curita Park, named in honor of Sergio González, who today is considered a pillar of the “July 26th Movement.” In March 1958 he was shot to death by Batista’s police for having committed numerous terrorist acts.

Though it was during working hours, we counted several hundred young people of both sexes in the park and its surroundings. They were standing or sitting on its low walls, or leaning on cars, engaging in an odd way of wasting time, or worse. They were fishing for pesos. The commotion spoke all too clearly about the lack of employment opportunites from which our society suffers.

“What do they sell?” I asked an old vagabond who extended his hand to us, asking us for monetary help.

“Anything, ladies,” he said to us:  sex, drugs, jewelry.  Whatever you need.  But be careful.  If you deal with one of them, you will be lost in a heartbeat before the eyes of whoever, through the mysterious stairs of this neighborhood. 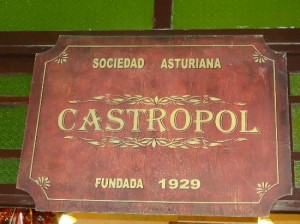 We entered an old family restaurant that in previous years I had visited on Aguila and Dragones, inside a small dwelling, without natural light or air, but where they served, for only 30 Cuban pesos, a little more than a dollar, a magnificent creole meal composed of black beans, well roasted pork meat, white rice and a typical dessert.

My friend Laura seemed horrified by the place and we left.

And a bike-cab took us through the famous Prado, while its driver told us that in the back of all those wide gates, which seemed in good shape, there were as many uninhabitable tenements as in any slum neighborhood of the city and that the water was in such short supply that many bathed in the dirty waters of the Malecon, in spite of the danger that this represented.

On the Malecon, between Genio and Crespo, the driver stopped and we entered the restaurant of the Castropol Asturian Society, founded in Cuba in 1929.

My old friend was right. A good meal is better enjoyed in a comfortable and agreeable place. There we enjoyed some delicious chickpea fritters which I recommend to my Cubanet readers.