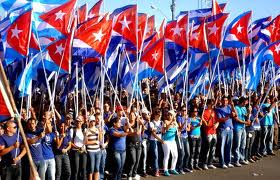 HAVANA, Cuba – All the official media is in a raging fanfare summoning to “the united people’s great mobilization which will take place in squares and avenues” this May 1st. Cymbals and trumpets are pleased with the wild benefits achieved by the Cuban working class.

Among the expected events collateral to “the party” was a lackluster celebration that took place on the 144th anniversary of Lenin’s birth on the hill bearing his name in the Havana municipality of Regla, while during the week, acts have taken place throughout, awarding certificates to union leaders. This year, there will be a “superior parade”, because during the closing ceremony of the XX Congress of the Cuban Workers Syndicate (CTC), the General-President called for an “earth-shaking” event.
And it really is amazing to see how much weight this land can sustain! The Cuban reality is increasingly incoherent. Only in Cuba is it possible to celebrate a trade union congress without any unions or syndicates, or to reward leaders of an organization whose most important contributions in recent times have been to announce and support–as if it were a preview–the government’s plan for the layoffs of 25% of the country’s labor force; to approve, undauntedly and without blushing, the Labor Code proposed by the supreme exploiter of the work force this past December 20th, unpublished as of yet, and to convene a parade of workers to support the same political system that strips them of such basic rights as the free participation in economic reforms that are being forged at the offices of the olive green caste, that is, on the back of those same workers. 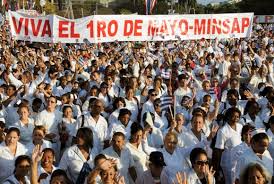 But Mr. Luis Manuel Castañedo, secretary general of the CTC, made an announcement this week in the capital that “this year’s march will be combative, massive, disciplined and compact, to uphold socialism, unity about the historical direction of the revolution, implementation of Guidelines and the support for the liberation of the antiterrorist Heroes, who remain unjustly imprisoned in the US.”

Thus, all mixed like in a Cuban stew, he rattled off his handful of stale and empty phrases, absolutely devoid of the least meaning for most of the people marching in the parade, and probably for himself.

Thus, for the short time it will take around the Plaza Cívica, Cuban marchers will postpone all illegal activities, such as robbing the State, smuggling, dealing in stolen goods, administrative corruption, etc., in order to march as obediently as frauds before the “crispy rice” monument, just before the statue of that foremost Cuban, who was never unionized and who, in addition, rejected socialism for considering it “future slavery”. One cannot conceive greater absurdity and hypocrisy. 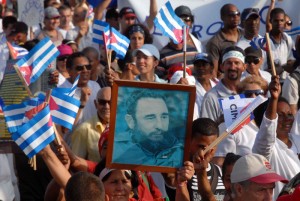 Just in case, and taking into account that the layoffs, “desertions” and constant emigration have decimated the ranks of the ever heroic Cuban workers , the CTC will make sure that the CDR (Committee for the Defense of the Revolution), the FMC (Federation of Cuban Women), the Combatants Association, students and the UJC (Young Communist Union) will be in attendance. We need to fill in, whenever possible, the obvious blanks that have been appearing of late among the ranks of the faithful in the processions.

When the tumultuous pantomime finally ends next Thursday, nobody will know for sure what the working class might really be celebrating, so many industry and job shutdowns, the tax increases, the insufficiency of wages, the breaches of the sugar harvest and agricultural plans, market price increases, the denial of the right of free contract or any other of many similar achievements that have come hand-in-hand from the Guidelines, the apex of the late-Castro fruit. Whatever. This is about a matter of pure form and not content, not necessarily of being, but of pretending. Not standing out.

If it were not so sad it would be laughable. Chances are that even Karl Marx himself would be surprised if he could witness the parade of workers held in slavery. And, on the record, all without the need for lashes or overseers. Some rascals, those who are always joking around, say that the General President has a hidden card to ensure attendance: whoever completes the parade’s circuit will be stimulated with a glass of milk. Now they tell us!