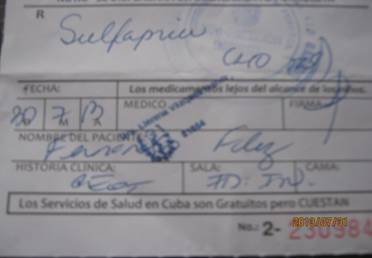 For health reasons I have to regularly visit a clinic in a hospital which for a long time now has been undergoing repairs which seem as though they will never end. I do not know if it is because it is just taking a long time or because of poor quality which causes things to have to redone on a regular basis.

I have noticed that there is a profusion of propaganda slogans in evidence at these facilities extolling the virtues of the Cuban health care system along with the requisite color images of its “maximum creator.” As though by decree all the posters and even the receipts now carry the tagline “Healthcare in Cuba is free but it costs.” This is true. It costs every citizen the salary not paid for the work performed during his or her lifetime.

It is not the “attentive, noble and magnanimous” state that pays for it. The money does not come out of its treasury but out of the pocketbooks of each of its citizens. The stated costs of a treatment or surgical intervention that a citizen receives are based on figures from so-called first-world countries. However, the stated value is not applicable here, where surgeons and other specialists receive poverty-level salaries. They are more than paid for by the majority of citizens making contributions for services they do not use because they enjoy good health.

It is a formula which guarantees the state always comes out ahead. It is worth noting, however, the benefits from medical treatments or surgery and those who pay for them are citizens.