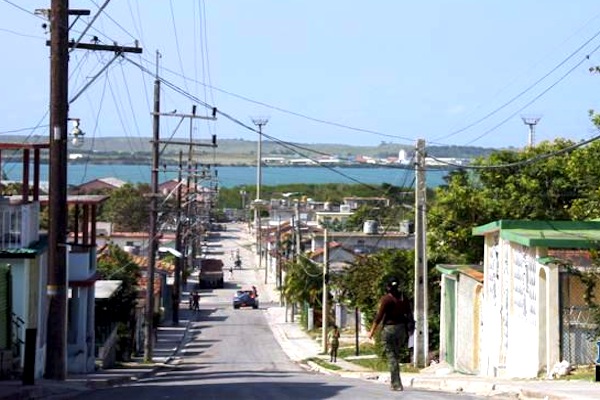 HAVANA, Cuba — The mega-port of Mariel and the impoverished town of Mariel are two sides of the “prosperous and sustainable socialism” — wealth and poverty — which Raul Castro promotes as a “solution” to Cuba’s problems.

The Brazilian company Odebrecht S.A. and Cuba’s Almacenes Universales S.A. — a subsidiary of the GAESA business group, run by the Cuban Armed Forces — make up the ZDEM business partnership. These two companies formed the Mariel Comprehensive Development Zone (ZDIM), which is managed by Almacenes Universales. Its mission is to provide services to the shipping companies that operate in the mega-port and use its container terminal. These facilities were built to meet the needs of Cuba and provide services to other countries in the area.

Brazil has agreed to provide 800 million dollars of credit subsidies to Cuba. The president of Brazil, Dilma Rousseff, and Raul Castro inaugurated the first phase of the port’s operation.

The town of Mariel covers 270.6 square kilometers and has a population of 44,597. It is divided into five people’s councils: Mariel Urbano, Boca Mojica-Henequén, Cabañas, Zayas-Ingenito y Quiebra Hacha. The average monthly salary for state workers not employed by the mega-port is 19.50 dollars.

“The town itself is in ruins,” a young pediatrician at the Orlando Santana Hospital tells us. “Why is it so neglected,” she asks, “when we have a multi-million dollar project like ZDEM so close-by?

Silence hangs over the House de Culture. A woman who works there, Consuelo, notes, “The art instructors keep giving lessons as best they can, but young people would rather go to the La Cañita nightclub where regaetton bands and some other son or timba groups play. They sell watered-down draft beer. People are always getting drunk and it leads to violence.”

Emblematic of Mariel is Motel La Puntilla. Built in the 1960s, it remained in operation until sometime after 2000. Now only a small private-event space remains open.

“You are not allowed to take photos as La Puntilla,” an employee who requested anonymity warns me. “Word has it that a company from Artemisa is going to renovate the motel, that a budget has been approved by the province, but no one knows when that will happen,” she adds.

We stroll around the abandoned motel. The swimming pools are empty but otherwise seem to be in good shape. The building, however, requires a significant capital investment.

If you have money you can find pork, beans, fruits and vegetables, but I have to pedal a lot just to eat,” says a bicycle taxi driver, who operates from one end of town to the other, adding, “A pound of pork cutlet is 40 pesos. A pound of rice costs 5 pesos. And you have to buy it from private sources because of shortages at the state-run markets. To give you an idea, a pair of shoes costs 20 CUC.

Leonel, another bicycle taxi driver, explains, “Public transport is a disaster. There is a bus that runs three times a day between Mariel and Havana and costs 2 pesos. A fleet of private taxis charges 30 pesos for the ride to Havana but not everyone can afford to pay that.”

An elderly man in his eighties noted, “They let us fish in the right side of the bay. And if we catch something one week, we reel it in. We can sell needlefish, emperor fish and marlin for 30 pesos a pound.”

In the town of Mariel only the main streets are paved, including the stretch where the Cuban Communist Party headquarters are located. The the rest are full of potholes, leaks, empty trenches and standing water. While its inhabitants look with hope towards the mega-port, there are rumors that foreign investors want to demolish the old Mariel and construct a new town around mega-port.