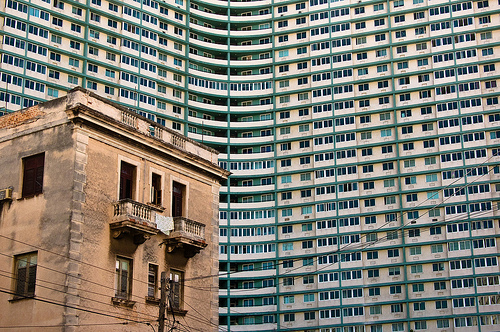 If something distinguishes the City of Havana it is its two faces, that quietly and peacefully coexist, in one the ugly and in need of painting and maintenance, and in the other the repaired and comfortable.

These contrasts have become more visible after the penalization of the dollar was lifted in 1993, when waves of capitalism spread first through the Capital and later through the rest of the country.

In Cuba, the differences hit you in the face. The services in stores and cafeterias paid with the national currency are deplorable. The variety of products can be counted with the fingers in one hand, and the bad quality of the products is insulting. The businesses are always dirty and empty and the service is bad, lacking work ethics, they spend their eight hours at work, talking to one another. To them they give the same, whether they work or not their salary won’t exceed 300 pesos, about 12 dollars.

The opposite happens in the islands of capitalism which, with an incredible speed, are popping up in the city. Malls, stores, cafeterias, restaurants, photo labs, gas stations and bookstores, are among the establishment with an acceptable presentation and a diversity of products that for a foreigner may not seem too extensive, but for a Cuban it is a novelty to see in the display case of a cafeteria around twenty articles.

To be able to buy or enjoy those establishments, you have to have Convertible Cuban Pesos (CUC) the hard currency that replaced the dollar after April 9, 2004. It was a superlative incongruity that the money of the United States, the number one enemy of Fidel Castro and his Revolution, would circulate freely and make possible any transformation or social improvement

It is estimated that only through the concept of the family remittances, around one billion dollars come in the country annually. According to official statistics, forty per cent of Cubans have access to the hard currency. But in Havana the amount could go as high as sixty or seventy per cent of the population. That is why the growth of the offers in CUC or Convertible Cuban pesos do not stop increasing.  Especially if it is known that the the merchandise that it is sold in CUCs has its value altered due to the taxes.

Antonio, a corporate financier, affirms that all articles sold in Cuba have a marked up price of about 100 or 200 per cent over the cost. If we credit that information, the earnings that end up in the government coffers are very high. Just because we classify the country impoverished and of the third world it is not an obstacle for the prices on the Island to compete with those of London, Paris or New York. In spite of this, the sales in hard currency increase year after year.

If Cubans could go shopping in Florida, Jamaica, Caiman Islands, Dominican Republic or Mexico, the situation would be different. The internal hard currency market has no competition, and the citizens have no choice but to shop in the Socialist stores with the convertible Cuban peso, a little more pleasant and stocked, but equally inefficient as the ones that use the National currency.

Added to the family remittances are the earnings of artists, writers, famous athletes, and the female and male hustlers (jineteras and pingueros). In this category, you will also find the people within the Country who have a bank account in hard currency.

The Cuban peso, the National currency, is a caricature. With it, you can only buy vegetables, beans, pork meat, rum, cigarettes, and one or another “freed” product of quality inferior to that available for convertible Cuban pesos.

While communist Havana looks like a metropolis demolished by a bombardment, reflecting the decadency of the system, its capitalist counterpart, in plain view, projects its impeccable and colorful paint. And with big glass panes, in some instances tinted, so that the poor outside can not see what it is offered inside.  Jewels of urban architecture such as “the Lonja Del Comercio” (1909) and the Bacardi Building (1930) both in Old Havana. They have been transformed to offices equipped with up-to-date technology.

Seventeen years have gone by since the penalty for owning dollars was lifted, announced by Fidel Castro on July 26, 1993. In this time, capitalism has advanced slowly through the City. Hotels, Malls, Taxi Fleets and leased cars for tourists serve as testimony. However, this has not been an obstacle to Havana having two faces.