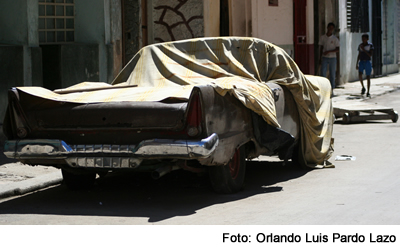 I remember very well the children’s parties that ended with the pushing and shoving and laughter of those who wanted to grab a candy or a gift. The piñatas, shaped like a clown or a boat or resembling some cartoon character, were the funnest part of every birthday. But that time has passed and what is being distributed now in our country is not sweets or balloons, but properties. Like the Nicaraguan Sandinistas once did, or the leaders of the Communist Party in Russia, Cuban leaders are distributing — at their convenience — rental properties, cars, businesses, houses.

Yesterday’s publication of Decree 292 — for the ownership transfer of motor vehicles — has been the culmination of a several decade’s wait. For far too long obtaining a car has been a perk earned through unconditional ideology. Now, they have added a few pinches of this ingredient called “market” to a mechanism that has been ruled for half a century. Even with this new legal reform, however, the great majority of citizens are only allowed to buy a used car, which in Cuba means vehicles more than 15 years old, and in particular Russian Ladas or Moskvitches, or Polish Fiats, which were previously marketed through a meritocracy. Some modern cars in State service will be sold to those who meet the strict requirements of belonging to an institution and demonstrating their fidelity to the Government. And those impeccably new ones, recent imports, are destined for a Revolutionary elite that has in their pockets money sanctified through official channels. To drive a shiny Citroen or a late model Peugeot will continue to be a sign of being a member of the powers-that-be.

Another revealing detail in this resolution is the emphasis given, in its pages, to the concept of “final departure” for those who relocate abroad. If, as Raul Castro himself has said, we are committed to migratory reform, what is the significance of not repealing this shameful category? Those who leave may not sell their cars before departing, they may only transfer them to their closest relatives. The penalization of emigration, then, remains in place. But what is most worrying is the already visible composition of the piñata, the structure of a sharing out among equals, embodied in cars taken out of tourist or business use which will be marketed to a very select group of people. The existence of such a mechanism will undoubtedly feed corruption, “socialism,” and put into the hands of government sympathizers the fattest strings for when it becomes necessary to pull on them in unison. I have no doubt that to this party, which they have already begun to prepare, we Cubans will not be invited.