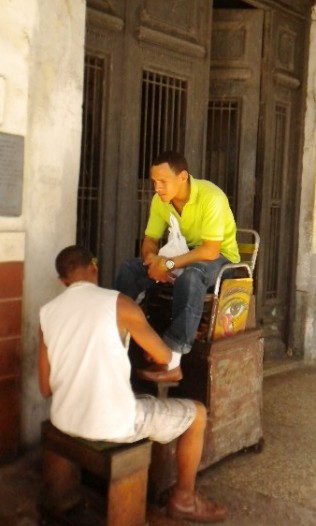 In an early hatching of 2011, my city is full of tiny businesses selling useful and useless things. Some sidewalks in Havana these days remind me of the nervous and chaotic pulse of an Asiatic city. Many people with a doorway on a more or less busy street have taken out a license to survive on their own; others set up a rough metallic shed coarsely made, the ugly and poor version version of a container to sell pizzas for eight pesos. Everything that disappeared during the so-called Revolutionary Offensive in 1968, the little that was left in private hands after the nationalizations of 1960.

On all the streets — Carlos III, Ayestarán, 42nd Street, Diez de Octubre and Avenida 51 — you can find clothespins, eyeglasses, dye, plastic cups. And disks, disks and more disks. Predominantly rough shelves with disks when you pass through these emerging businesses. National music, foreign, children’s, TV series. The success of this business isn’t strange, a celebration of piracy in a country used to seeing cartoons, soap operas and movies on national TV where they “modestly” cover the logo of the originating broadcaster.

Watching this winter hatching, I surprise myself thinking about the layoffs that have begin and the available options for the “available.” It’s difficult to undertake these activities in the already congested streets of my city.