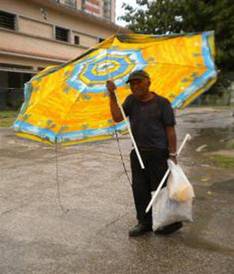 Some years ago, when they started granting licenses to engage in a few types of self-employment, some people who had been working in the underground economy to supply families with fresh and powdered milk, yogurt, butter and cheese, fish and seafood, meats, clothing and other products and articles, as well as serving meals from home, on hearing that they could now do this legally, told me that didn’t have the least bit of confidence in the government and would continue to do it in their own way.

They kept their word, and despite the persecutions, fines and forfeitures, still continue to do so. Given recent events involving some self-employed workers who are now prohibited from carrying out their activities, it seems that they were right.

This new step back by the authorities, one more in their continued retreat, is going to throw thousands of Cubans on the street, people who will now have to return to inventing some way to make a living and survive, with all the resources they invested lost, abandoned by the government that says it protects them.

As nobody accepts dying of hunger by decree, some are looking for new businesses, and others, the most optimistic, are returning to illegality, strengthening the development of the black market.

I don’t know if the authorities, worried about maintaining absolute control at all costs, have assessed the economic, social and political consequences of their latest blunder. With these absurd measures, to speak of progress shows a lack of respect for the citizenry and also strengthens the disrepute in which they are held by ordinary Cubans, who, in practice, respect them less every day.

A government entrenched in power for over half a century, keeping the same leaders in the top jobs, does not change: it only repeats itself, repeating its same mistakes.