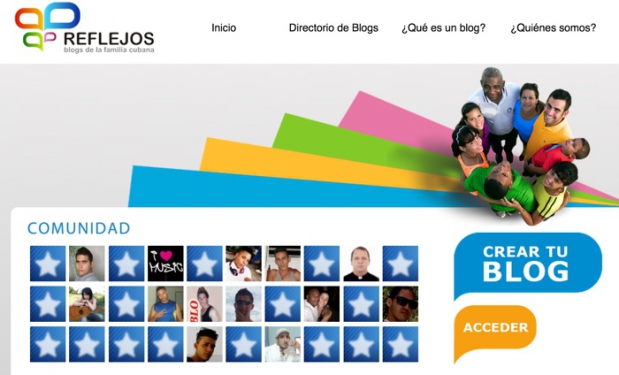 The regime announced this Thursday that it is now equipped with a “solid blogging platform, open to the entire national .cu online domain,” which is accessible outside the country, according to official media.

“This young interactive space, named Reflejos (“Reflections”), functioning since September, has permitted millions of users to create their own blogs to express their interests and opinions,” said the official news agency AIN.

Kirenia Facundo, a specialist with the Cubava Digital Facilitation Project, explained that the service functions “as a mirror of the national reality, and contributes to the needed technological sovereignty that is proposed for digitizing our society.”

Diario de Cuba was able to determine that the platform requires information such as the national identity card data of any potential blogger.

In addition, the terms of use prohibit bloggers from “transferring, transmitting or publishing content that is illegal, counterrevolutionary, harmful, threatening, abusive, harassing, salacious, defamatory or vulgar,” among other characteristics.

Raúl Van Troi, director of the Youth Computing Club, indicated in Havana that “the principal policy governing the use of this space is and will always be to promote the truth of Cuba and its Revolution, from a position of commitment and respect.”

Recently, the authorities announced that a “secure” digitization, in keeping with “national priorities,” was underway.

In addition to the blogging platform, other services are being developed, such as La Tendedera (“The Clothesline”) and El Pitazo (“The Whistle”), substitutes for Facebook and Twitter, respectively, which cannot be accessed from abroad.

In this field, Havana follows the Beijing model, which blocks access to the most-used, global digital services.

Previously, the regime launched EcuRed, a type of Wikipedia that is very controlled and scarcely participatory. The China Facebook is called Renren, and its Twitter, Sina Weibo. There are also products that stand in for YouTube, Google, and WordPress.

In China, technology platforms are managed by private companies, but they are strongly controlled by the Chinese Communist Party. Even so, from time to time, controversies are sparked in those spaces.