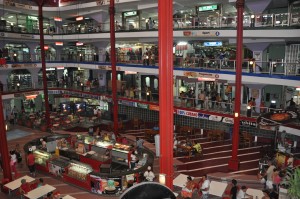 Havana, Cuba, November, www.cubanet.org — The details of the corrupt practices detected in the Carlos III Complex of stores and in a municipal entity in the business of community services reinforce opinions about the incapacity of the government to stop a phenomenon that has metastasized in Cuban society.

As on previous occasions, people have counted on documentary proof of the facts, recorded on flash drives that are distributed furtively from hand to hand.  One never knows who is the initial provider, but presumably it is a premeditated act in the Ministry of the Interior. The lack of official information is compensated for by the traffic in copies, rented or sold, to a clientele eager to find out the identity of the guilty parties and their schemes to enrich themselves.

Both cases, occurrences in Havana, again reliably demonstrate the infeasibility of economic centralization. In most state enterprises. a lack of administrative control still prevails, which facilitates the growth of corruption in all its forms.

The efforts by the General Controller of the Republic to put a stop to it are worth nothing. Few wind up in prison. The rest contrive to continue their dirty shenanigans which include embezzlement, extortion and bribery.

“Prices in all the stores are ’fined.’  Besides being already inflated by order of the enterprise that provides the merchandise, extra is added that is later shared between the management, the financially responsible, and the employees,” a store clerk explained to me on condition of anonymity.

“Our salary is a pittance. If we don’t do this, it would be like working for free. It’s true that we steal from the customer, but those are the rules of the game. This is every man for himself,” he added.

In the conversation I found out that the managers make off with the greater part of the illegal revenues. In some cases their earnings exceed 300 convertible pesos a day. Such dividends represent a fortune in a country where the average salary is less then one convertible peso daily.

Among the beneficiaries of these illegalities must also be mentioned the hundreds of former counter-intelligence officials. Not a few are listed on the security payrolls of each shopping center, others work as inspectors of those who have to deliver part of the booty. Refusing to do it is the shortest path to jail.

In the end, everything functions without setbacks. They only have to comply with the established codes. From time to time, the general controller, Gladys Bejerano, in order not to completely lose her credibility, decides to put an end to some of the corruption. It is like putting your hand in a drum with your eyes closed. You will always extract a corrupt person, but at a low level, since the big ones are untouchable.