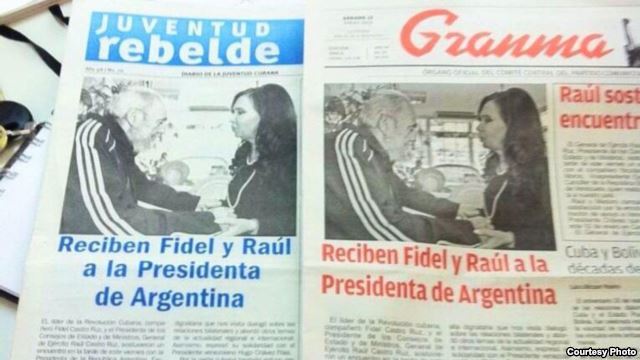 On 14 March, one more anniversary was celebrated of the appearance, in 1892, of the first issue of Patria, an old dream of Jose Marti in which Tomás Estrada Palma, Manuel Sanguily, Gonzalo de Quesada, Manuel de la Cruz, Enrique José Varona and other important figures participated, managing to fuse politics and literature. The role, at that time, of this important newspaper was clear, and the apostle — Marti — described it in his editorial: “What the enemy has to hear is nothing more than the voice of attack itself… This is Patria in the press. It’s a soldier.”

Because of this commemoration, Cuba’s first vice-president Miguel Diaz-Canel, toured the facilities of the national television information system, and afterwards congratulated all the workers on the anniversary, baptized as “Day of the Cuban Press,” and he called on them to perfect their reporting work.

A small concern seemed to upset the leader on making these declarations, in the “improvised” conversational exchange, later rectified with absolute precision: Any work of the Revolution is incomplete if it’s not in the present press.

Why the urgency to amend the supposition. Because Mr. Diaz-Canel, like any other leader, knows very well the invisible guiding hand that manages our real politik, where there is no room for these kinds of errors, they are simply deliberate negligence, or purposeful inaccuracies, that should be punished.

The unaware assert that the Cuban leaders fear the opposition; but for them the dissidence doesn’t exist, they are afraid of their own power and paranoia leads them to calibrate every accent, every word, every phrase in its multiple interpretations and every detail with maximum rigor.

In Cuba there are no secrets, but we must distinguish them. Everyone should know that for Cuban parliamentarians, the concern isn’t the time that their names appear in the news, but the location of the chair that they will occupy during the next session of the National Assembly.

If we looks closely at the image of a plenary session in the Palace of Conventions, irrespective of whether its organized by the provinces of municipalities, it will not be difficult to decipher the terror of the officials who know how their own goodwill is measured by the tapestry of their chair and how close it is to the leader.

Occupying a plastic chair, located in lowlife class, feels as secure as prostitutes felt in Moscow during the Cold War.

The leather armchairs in tropical class represent the more important and deserved reward. Space reserved for people skilled in the art of meanness. Knowing you’re in tropical class provokes a certain expectation and converts you into hungry wolves or quarrelsome sheep waiting for the slightest opportunity to tear to shreds, circumstances which can serve to climb into the beige leather armchair on the great podium of superiority. Where Diaz-Canel sits. Hence his justified tremor, knowing that if he commits a single mistake, in less than five minutes he can be in the dungeon.

As my grandmother said of someone who didn’t speak for days,”Ah son, when are you going to understand that in Cuban politics ideology is pure facade, so leave it in the hands of the idiots and the military.”