The Quixotic Soul of Rafael Alcides
For Luis Rafael 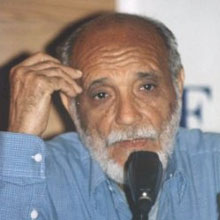 An emotional Havana evening, the kind which seals memory with a light of fire, I met the poet Rafael Alcides Pérez (Barrancas, 1933). Choosing to remain anonymous, as is his custom, he was in the audience which was attending the launch of my poem-book Colómbico, being held in the bright room of Havana’s Hotel Inglaterra.

I learned he was there almost immediately after I had finished my duties, after signing a few autographs for friends and strangers, when the poet and critic Virgilio López Lemus, who had made the eulogy for my book, came with Alcides and introduced me to him. “It’s a must have for Cuban poetry,” said López Lemus and Alcides smiled indulgently. Silent, hardly daring to comment. His eyes, however, scrutinized every gesture, like his poetry.

Born in the eastern town of Barrancas, Alcides moved to Havana to study for his baccalaureate and thence to Havana, where he graduated as an industrial chemist. A nomad since he was young, he traveled to Mexico, USA, Argentina, Chile, Uruguay, Venezuela, writing poems here and there like someone taking photos.

A member of the “fifties generation” — writers born between 1925 and 1945 — affiliated with Cuban revolutionary project headed by Fidel Castro and which sought to banish exploitation and inequality from the island, Rafael Alcides put his literature at the “service” of a nationalist  and justice-seeking ideology, writing crystal clear, intimate and clearly understandable verses for the people who shaped his poetry, colloquial, at times choral, other times intimate and questioning, which bears witness to the present and defends the future.

During those years of dreams and hope, he worked as a producer, director and writer for radio and unveiled the new conversational, lyrical canon of articles and reviews for the magazines Unión, Casa de las Americas and La Gaceta de Cuba, and on his radio programme, In the place of poetry. So he was recognised as an author of value, who published the poetry books: Mountain Hymns, 1962, The Wooden Leg, 1967.

History, however, was in charge of clipping the wings of dreams and the 1970s came with their censures and excesses. After a publishing silence, the lyrical work of Alcides reemerged in the eighties, with poems that speak of a change of themes and approaches, where the poet becomes questioning, doubtful, raising his voice of dissent and seeking answers in epic genre of everyday life.

He dares to deal with issues and questions which speak of this “Quixotic soul” for which he is recognized, and that leads him to confront “windmills” knowing that they can throw mud at him, under the indifferent gaze of Sanchificados. The artist decides to retreat and write from the margin. His commitment to justice, sentencing him to be an exile within his own country, which however takes the point of view that a poet is a creature “charged with bearing witness to the present day and announcing it tomorrow”.

His writings express the irony of someone who knows that his work doesn’t deny but rather affirms. Grateful like a dog, 1983, And they die, and they return, and they die, 1988, Night in memory, 1989 Nobody, 1993, all carry his rebellious speech, his faith in humanity and his desire for communication, which is also evident in the anthology published in Spain by Renaissance and entitled GMT (Seville, 2009), a compilation of articles written between 1963 and 2008. And with each poem Rafael gallops upon Clavileño, dreaming of a utopian island which his sincere verse and Quixotic attitude have conquered.

The writer Ángel Santiesteban Prats will receive a new tribute, this time from the poet Rafael Alcides. State of SATS* will open Cafésatso, a space for literature, conversation and pure coffee.

Rafael Alcides will dedicate his presentation to Ángel Santiesteban, wrongly imprisoned by the Castro dictatorship.