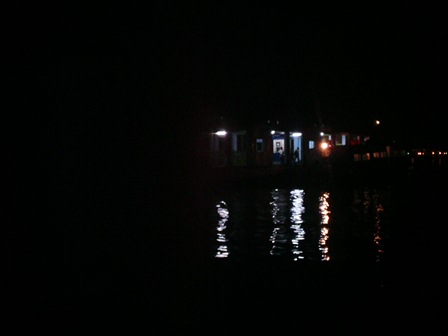 My name has been printed in a filthy little “Incident Book” at the Muelle dock for the Regla ferry. While still at home I felt this strange hyper-attentiveness to some details, which always ends in finding out it was intuition, and meanwhile in my backpack I had some big scissors, the kind used to cut hair, rather than the little ones used for fingernails and thread which I couldn’t find. I don’t like pulling threads, or biting them, and on this occasion I had kept a needle and some thread in the backpack, as well as the scissors, in case I was out and had to fix the strips of fabric on my shoes, which are tied around the ankles like those of ballerinas.

I’m telling you this who series of little things to explain why my backpack had the scissors in their red box and, along with them, a needle and different colored thread. I wasn’t thinking about boarding the Regla ferry today until Alfredo invited us to stroll through Old Havana and later, walking around Plaza Vieja and chasing the pigeons, we thought we’d finish the tour at the Christ of Havana.

Before I’d stopped in front of the Castillo de la Fuerza and been reminded of The Enchanted Masses*, I’d tried to think of Cuba. To conceive of Cuba after my friend Mario had thrown back in my face my lack of patriotism, because long ago I forgot the pitahaya flower, the hummingbird, cane sugar. But despite having been close to once again hearing the Cuban soul coming from some sulfurous crack of Hell, that Enchantment of the Masses, facing off with the revolutionary education system could not save me from the state absurdity a few steps ahead

I was thirsty so I showed up in the entrance of the Muelle ferry dock with a can of lime soda. Before all the security paraphernalia and police officers too young to be carrying guns, waiting for my backpack to be searched, I received a message sent from my paleo brain wondering in how many ways one can of soda can be a weapon.

I had no qualms about letting them look inside my backpack, in fact I’d forgotten about the scissors, until a security guard showed me a sign that said these types of instruments cannot cross the bay.

The guard wanted me to show him my identity card, and this seemed a solution to be able to leave the scissors and pick them up when we returned. When he returned the ID to me and I offered him the scissors, he told me,

“No… but I can’t take responsibility for the scissors.”

“Then why did you ask for my ID card and write my name in your ‘incident book’?”

And guess what he told me:

“Because it is an incident.”

To insist on the injustice of having my name written in such a devious, such a suspicious book, seemed so absurd to me that I couldn’t think of any remedy but getting used to the disagreeable feeling of having abandoned my name. Having trusted so much in him, I hope that it returns to me with the same delicacy and ingenuity with which I have left it in some place of destiny, some membrane of time, some spacial membrane. In the case of Cuba, one must be very careful.

Never before have I had the sensation of abandoning my poor name.