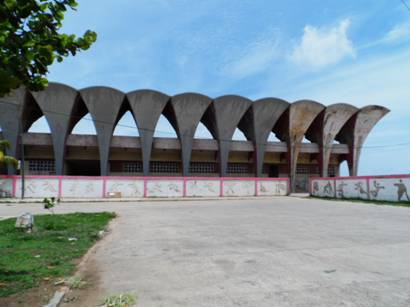 She is a beautiful woman, petite, friendly, very intelligent, with a great sense of humor and even a certain naivete that makes her appear still younger than she is.  Also, bachelors and masters in science, with many accumulated scientific achievements in her long career.

She lives in the heart of El Vedado, in a building from which in another epoch was observed a beautiful view of what was once one of the most architecturally important and lovely sports parks of our city, with a blue, almost always calm sea as a backdrop.

This park, like all the city, including, it is clear, the building where she resides, has been deteriorating with the passage of time and government apathy, to the point of becoming ghosts from a shining era now passed.  In any case, the same was remodeled and completed in 1960 to form five zones:  park, stadium, gymnasium, pool, children’s playground and volleyball and basketball court, with stands for 1,020 spectators, where the architect Octavio Buigas was showcased with the solution of the spectacular tiers that seated 3,150 people, covered by a light structure of concrete “domed shells” 125 meters long “kindred” to the famous Zarzuela Hippodrome in Madrid.

Her balcony is just across from this pitiful panorama today.  She lives alone and works in a hospital, so that for more than eight hours a day she is required to abandon her home, fearing the delinquents who take refuge in said tiers.  She, when she is home, usually peeks out to the balcony costumed on different occasions, sometimes as a firefighter, others with cap and sport suit and with hat and glasses, thinking in this way to mislead that element she so fears, with the objective that they believe that several people live in her apartment and so that it will not occur to them to plan anything twisted against her.

As she explains to me, there, under the tiers that are falling to pieces, live “homeless,” drug addicts, and all kinds of “characters” who even carry out clandestine dog fights, without the police trying to impede these criminal activities, given that, from what she and the neighbors have been able to observe, they are not only complicit, but also participants.  While in our country the Media “extols” discipline, order and socialist integrity, this only shows the other side of the coin.