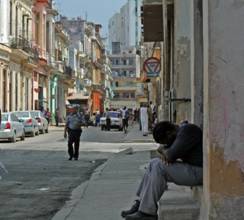 The violence organized by State Security to repress those who think differently on Human Rights Day, in Havana as well as in other provinces, shows once again the true roots of the repressive regime. While in South Africa the President tried to confuse people by talking about tolerance, respecting differences, dialog and peaceful solutions to problems, here his henchmen did the exact opposite.

The beating of the Ladies in White and L and 23rd streets, the refusal to allow a space to hold the Puños Arriba (Fists High) concert of the Cuban Hip Hop Movement (an end finally achieved in a circus tent), and the harassment outside the Estado de Sats site, quickly reflected on the Net and reported by the foreign press as front page news, show the forces of order, henchmen, enraged people, young pioneers and students with their teachers in the lead, actively participating in these acts of repudiation. What will UNICEF say about the this, about the use of children without permission from their parents, in these shameful and degrading acts? Is this how the Cuban state educates our children?

Despite the visits to people’s homes to sow fear, despite the preventative detentions, the blocking of access, and the statements that we have the strength to stop them, the planned events were held, and although they could have been inconsequential, this government violence elevated their importance and brought them to the world’s attention. One more mistake by an outdated regime used to ignoring the opposition, doesn’t understand that the only way to resolve the national problems needs the participation of everyone, without exclusions.

To suppose that developing messianic formulas in air-conditioned offices by governmental commission will provide viable solutions, shows the stupidity of the principal leaders. If they don’t listen to all the opinions and if they don’t take into account political discrimination, it will only be more of the same which, after being developed, will be submitted to the citizens for their approval without them or their legal representatives participating in its preparation. The old saying that man is the only animal who trips twice over the same stone, can be applied to the Cuban government, affirming that the setbacks have been and are many.