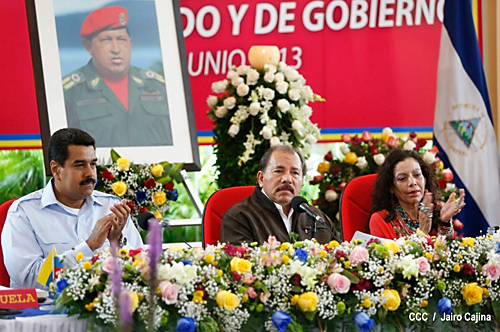 Photo taken by “The Voice of the Sandinismo”

I am not going to refer to the song by Mexican Jose Alfredo Jimenez but to the spirit, the intention that gravitates like smog over the Cuban archipelago and part of the world.  Given the person that it concerns, we should be accustomed to that kind of personal publicity stunt, but in that respect he does not cease to surprise us.

Fidel Castro, the ex-president of my country, appears from time to time in the media to intone with his muffled voice like the whisper of an old conspirator and guerrilla the melody “I keep being the king.”  First it was Rafael Correa for his retaking possession of the highest post in Ecuador, now he makes public a letter of congratulations to Daniel Ortega and his wife Rosario Murillo for their interventions in the Petrocaribe Eighth Summit.

One could not miss in the letter “the recognition” of the black Venezuelan udder, now led by the verbose Nicolas Maduro.  Throughout this process we have observed Castro I’s  fawning over all who have financed and supported in some way his blunders and experiments in his management as head of Cuba.

In the Soviet era they uniformed our children in the Russian style, filled our television with films and cartoons from that country and even made us study the Russian language by radio.

He still shows the same stagnant and immoveable political discourse — for the Cubans — anchored in past decades from which there is no possibility of success, because he leaves behind the school of delay, corruption and lack of liberties that fosters, among other abuses, excessive control.

That’s why they begin with populism and transform themselves into dictators — I wonder if it is something implicit previewed by the strongmen leaders — because only so can they maintain power in spite of their resounding failures and ineptitude.

From the flattering political bubble with its rusted chain, he projects himself as the historic leader of the so-called Cuban revolution, maybe oblivious to the reforms that his brother Castro II is making to his inflexible model, but aware of those who provide the continuity of his last name, family and lineage in order to wax eloquent.

If anyone has any doubt about Castro I’s blandishments, he only has to refer to the end of the letter of yore, dated June 28, 2013.  In it he committed a monumental historical error by erasing with a keystroke the known phrase “Until Victory, Always” by Ernesto “Che” Guevara in order to award it to his friend and oil creditor Hugo Chavez who borrowed it, included as a goodbye in his speeches and made use of it repeatedly.  So, if Paris is well worth a mass, Venezuelan petroleum that guarantees them the permanence of power, well deserves whatever praise, although it may be an evil thing.