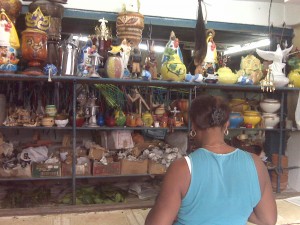 HAVANA, Cuba, Novemer 2013, www.cubanet.org — Back then there were images of abundance. Our elders say it was a gift to the senses. Memory arouses a nostalgia for a kind of lost paradise.

“It was quite a city, quite a city. It was cheap, cheap… All the fruits and vegetables you could want. Cuban fruit (frutas de caney). The Chinese brought in apples. There were apples from California in wrapped in Chinese paper. They were in a basket that said they were from California. The fish was fresh. The fishermen went around with zinc coolers where they kept the fish on ice. They got the fish fresh off the boats. You could find fish anywhere. If you wanted lobster, they would sell it to you live. There was parguito, the best fish I ever had. And bass cut into steaks. There were Chinese and Italian restaurants. I remember, when my husband and I would go to a cabaret, we would stop there at one or two in the morning to have some wonton soup and it would be full of people. All that is gone now.”

Nowadays the Mercado Único (One-of-a-Kind Market) is known simply as Cuatro Caminos (Four Roads). The downstairs looks as though some Lilliputians launched a “Haitian revolution” and exiled Gulliver. The only horn of plenty to be seen is the one carved in stone on the face of the building. Remarkably, it remains intact. In spite of Raul Castro’s economic reforms legalizing self-employment, there are only a few small, almost invisible businesses. Outside a CADECA currency exchange office, with its sign advertising 90 convertible pesos for 100 dollars, there is only a liquor salesman and someone hoping to find customers for a few animals at the building’s perimeter. 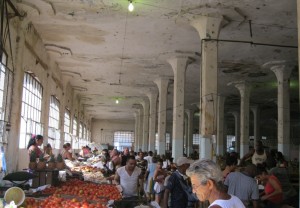 The building itself is falling apart. The roof, supported by steel-reinforced columns (well-worn Herculean columns), is damp and the trapped water seeks an escape route through cracks in the ceiling, threatening the structure with collapse.

Fruits and vegetables are still sold in one wing of the market. The vendors swear that you can find products there that are not for sale in any of Havana’s other “agros” or farmers’ markets — fruits like canistel and guanábana. Seventy-year-old Angel says, “Those of you who were born later don’t know about Cuban fruits. So much has disappeared that we no longer even have names for things.”

At the entrance on Manglar Street (now Arroyo Street) there are large cages with live poultry for sale. A young man wearing an attractive necklace of red and black beads approaches us. His name is Ronald Rodríguez, but tells us we should call him by his religious name, Eshu bí, which means Son of Elegguá. In Afro-Cuban mythology this orisha, or Yoruba deity, is the protector of travelers and the deity of crossroads. After saying hello, he proposes a barter exchange: “Put my photo on Facebook.”

“We sell animals to Santeria followers and practitioners, who use them in their rituals to save people,” he says. 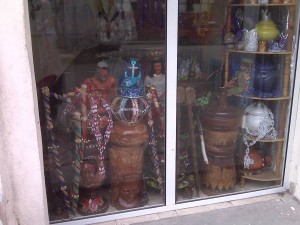 An animal vendor (who asked not to be identified) says that on average eighty people a day make purchases there. He notes that the sale of goats and sheep is illegal within city limits, which makes it more difficult to get animals. Now the “animaleros,” as they are called by Santeria followers, only do work on special request. 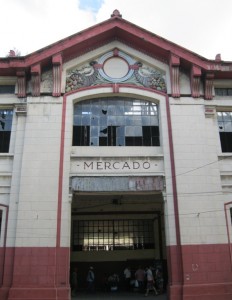 An interesting phenomenon in the vicinity surrounding the market is the number of traditional Cuban Yoruba religious articles for sale. What previously had been modest businesses selling these items have become veritable boutiques, with windows displaying art associated with Afro-Cuban sects. A wood carving might cost 900 CUC (or roughly 900 US dolllars).

One of the store owners

According to Yoruba tradition, public plazas are where one finds both the living and the dead. In Cuatro Caminos residents of Havana turn to the four street corners (the four cardinal points) to ask the blessing of Olofi and the spirits who live in the plaza. The most popular items for sale here are herbs, coconut and candles, which are used to “make a saint,” a rite of initiation. Some people shop for herbs for use in spiritual cleansing rituals. 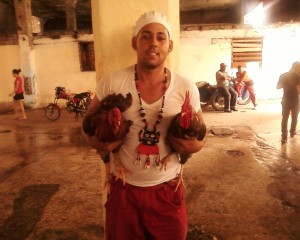 “There are seamstresses who make priestly garments. We bring in the materials from Mexico. Artisans make the beaded necklaces and bring them to us. We have everything here that people need. Everyone has a retail license. In the old days, until the early 1960s, herb vendors used to operate out of pushcarts. You can’t have pushcarts on the street anymore, but the herbalists can sell out of their homes. Cuba has created a Yoruba religion with the hope of prosperity.”

Cuatro Caminos is still an exceptional place, a point of confluence with access to any location in Havana. Calle Cristina (Cristina Street) leads to Avenida del Puerto (Port Avenue) where there used to be a ferry with daily roundtrip service between Havana and Key West.

After 1959 the new revolutionary government banned private property along with civil and political liberties in the name of a dubious majority. With them went citizens’ freedom and rights.