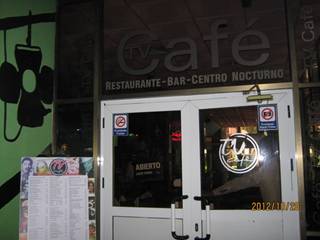 Last Sunday we had to go out to attend to some matters, among them to collect a bit of money from the sale of some work. Another was to see a poster announcing a line of cosmetic products whose model is the daughter of a very dear friend of mine, and also one of my students.

This caused us to be a bit late, so we decided to have lunch at a very famous restaurant, which is located in the central commercial district on the lower floors of the Focsa building, where the posters we had gone to see were being displayed.Café TV is a large and comfortable place, whose decor has some something to do with television on my planet. Its walls are filled with photos of our most famous entertainers. Just past the entrance I noticed a sign that said taking photos was not allowed inside the restaurant, which I found strange considering that the people who go to these places, especially tourists, generally want to have some token remembrance of having been there.

A young man with the face of an angel came to wait on us. He very politely handed us the menus and a little while later came back to ask if he could take our order. He returned again and, with utmost pleasantness and perfect manners, brought us the beers we had ordered. We noticed that almost all the waiters were very young, possibly recent graduates new to this field.

The young man in question would then successively come and go, asking us if everything was alright, if we would like something else… in other words, everything one would expect from someone in his position. And always with his left arm behind his back, as they teach them in culinary school.

The food was excellent and reasonably price, too. Well-prepared and beautifully presented. Remember that these State-owned places, which charge in hard currency, now face strong competition from the private sector.

Finally satisfied, we decided to crown this very pleasant meal with the usual and indispensable cup of coffee. We motioned to the young man with the face of an angel, who immediately responded to our call. We expressed our satisfaction, declined the usual dessert, but asked if he could bring us two espressos and the check. Imagine our surprise when,in his very proper voice,he told us sadly, “I am very sorry, but the machine is fucked up.”

We left there stifling our laughter and noting that here was one of the differences between State-run restaurants and private ones. We also thought that the country itself is really a lot like the coffee machine.