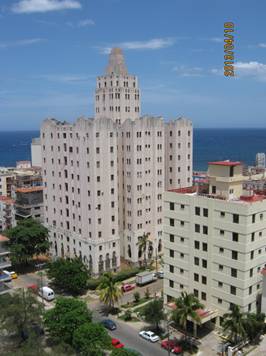 The López Serrano building, a work of Mira and Rosich, architectural jewel, constructed in 1932 and located at No. 108 13th between 11th, L and M in Vedado, has suffered a progressive deterioration for years, with the authorities doing absolutely nothing to stop it.

Looking around its exterior is to discover doors closed and boarded up and the glasswork in ruins, chipped walls, gardens turned into trash dumps, sewer water, and everything

conspiring against its existence and its inhabitants, in a display of a complete lack of respect for the city and its citizens.

It’s noteworthy that next to it is the Camilo Cienfuegos clinic, operating in hard currency, and a few yards away on 15th and Linea between L and K, the residence occupied by the National Headquarters of the Committees for the Defense of the Revolution (CDR), both of which received continuous maintenance, including frequent painting, as if these

facilities are more important and valuable than the Lopez Serrano building. It seems there are abundant resources for these types of institutions — collection points for hard currency and politically-ideologically focuses– and scarce resources to save our architectural patrimony.

We need to firmly demand that the authorities  repair and maintain this property, which gives an appearance to the city and makes it unique, before a group of  complacent architects declare that its structural problems were caused by construction errors, and approve its demolition, something that has happened repeatedly (the Alaska Building at M 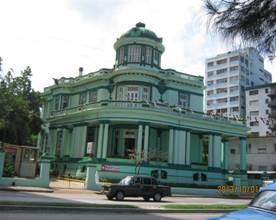 and 23rd and the Pedro Borras Astorga Hospital in the block of G Street, 27th, 29th and F, also in Vedado). We can not continue to allow these types of buildings to disappear, leaving us with a tiny little park in the space where they were, waiting for better times. Architecture is also an important component of national identity.