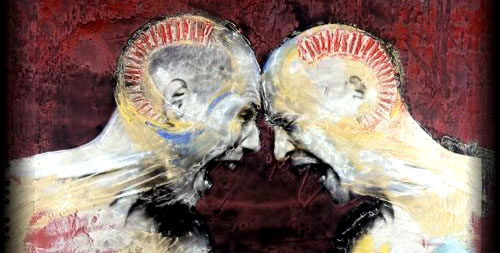 I would almost dare to ask the regular readers of this blog, to leave it this time. To not read a post not directed to them: a post that is not directed at democrats, the quick-witted, the open-minded. It is not for the readers who do credit to this space, or for those for whom nearly a year I have written texts with high pretensions (false modestly doesn’t prevent me from saying so), where I have reviewed every sentence, ever metaphor, every idea with obsessive rigor.

This time, it’s different. I am driven by a clear and unambiguous response. And a rather temperamental response, to not out of tune with my unredeemed Latin character.

A few months ago there appeared in this space a response addressed to the agents of State Security of my country. To the hounds of power who tried to blackmail me, using all the methods at their disposal to stop me from writing from my house at Parada 204 with all the passion of one who knows himself to be free.

Now I respond to the other repressors, the other hounds… although these are powerless. I dedicate these words to the poor troglodytes who roam the magnificent city that is Miami, and that in spite of them, in spite of their bold efforts, does not suffer the least stain or loss of status as a mythical city.

Where does this come from? Well, due to certain publications in this blog, (first, Blockade vs. Embargo: Reason Hijacked; then Uncomfortable Freedoms; and finally, Another Stretch of the Sea Between Us), and after my television appearances in recent days opposing the proposal of Congressman Mario Diaz-Balart to revive the restrictions on travel and remittances from the Bush years, some of these Cro-Magnons have readied themselves and dedicated anonymous telephone calls to me and sent me emails with their feverish irritations, their subtle tones of offense, because “I have dared” to not go along with them.

In the first place: I did not confront the government of my country, the servile wretches who sustain it, and every kind of adversity that this implies in Cuba, because my life lacked excitement. In other words: It was not a cause chosen by rebellious inner adrenaline that said, one fine day, “My goodness, my life is very calm, let’s go look for problems.”

I faced it head on, without mincing words, because I will not allow anyone to restrict my individual freedoms. Because I will not permit a bunch of idiots (“Locusts” the great Oriana Fallaci called them) to put locks on my freedom of expression. And above all–forgive me readers of my other texts: I tried to divert you right at the beginning–because apart from intellectual pretensions, I have the balls necessary to say what I think when I’m asked.

Unlike you, poor bitter locusts; you do not realize that you lose more followers every day, every day you make less sense to them; instead you are dying, day after day, out of fear, even in this country of freedom.

Yes, I repeat: you are dying of fear. When the light turns red you think, “Horrors! A Communist stoplight!” When a shadow appears at your side, “A Communist is following me, I’m being stalked by a Communist!” And when you run out of arguments and have nothing to say, you are like babbling babies repeating the same word over and over, “Communists! Communists!” with trembling jaws and a shameful lack of strength.

No, poor devils, you are not this great nation. This nation is so rich, so vast, unique, among other reasons because it has also sheltered you, who think yourself great democrats, but democrats in a totalitarian style, “If you think like me, bravo; if you don’t think like me, enemy.”

Do you realize, Manichean locusts, drivers of bankrupt steamrollers, do you realize that you have no fucking idea of what democracy means? Do you realize that you repeat the word and in your mouths it sounds hollow, empty, because in your infinite ignorance you don’t know that a Utopian named Rosa Luxemburg said something so simple and convincing like, “Freedom, freedom is essentially those who don’t think like us”?

And you will find out, as if no one has already told you: the only thing that separates you from your presumed enemies, the only thing that divides you from the darkest functionaries of the Ministry of the Interior, do you know what it is? A strip of sea. Ninety miles. You throw the bones of the dissidents in jail just like they do. They, there, will throw your offensive slogans, star in your incendiary marches. In some modern idiom your most recurring slur — Communist — should rhyme with their most recurring slur — Mercenary.

And do you know what else most differentiates you, Locusts of Miami, from those repressors for whom, even more than hate, you feel a lethal fear? It is this: unlike your “colleagues” of State Security, as opposed to Party officials on the Island, and the infinite gamete of dictatorial hounds who populate it, you don’t have one iota of power. The share you had in decades past, thank God — really: thanks be to God — has long since slipped through your hands. You exercise your right to protest, to shout your slogan — Communist! Communist! — and everyone else exercises their right to laugh at you, and to ignore you.

It is the price of living in a country that exceeds them, poor devils. A country that has not known dictators, and when the bitter name McCarthy appeared in its History, it was erased without mercy so that it would never be reborn. Indeed, note the fact: the darkest man in American democratic history, Joseph McCarthy, today detested, reflected something in you: he accused Charles Chaplin, Raymond Chandler, Dalton Trumbo, of being traitors, communists.

Well, that lack of power you suffer today, that lack of determination, that having nothing more to do than to shout, “Communist! Communist!”; that lack resonance you must feel–I feel sorry for you–to live in a nation where freedom overwhelms you.

At times you would wish for a few hours of repression. Right? In your darkest dreams and desires you have come to yearn for a single day, barely twenty-four hours, of total impunity for stoning the houses of those who say things that offend your tender ears; to lynch–like the Castro mobs against the Ladies in White–your enemies, while singing the usual nervous chorus: “Communist! Communist!”

Let me tell you something else, ludicrous locusts: the dialectic wasn’t a Marxist fantasy. The dialectic is a social evolution, and it is this which every day crushes you more. The evolution of freethinkers like me, like my friends on the Island, like so many honest and educated exiles, true democrats whom I have met in just the six months that I have been here. The evolution of those of us who don’t work for the sake of hatred, but for love of Liberty. And do you know why, poor headless ones? Because the alternative it so follow the doctrine of a presumed enemy of yours: That Che Guevara whom you detest so much, but who said the ultimate thing by which all of you are unknowingly guided: “The only sentiment stronger than love of liberty, is hatred for those who would deny it to us.”

Because you know what? I make you a gift of this hatred, Miami Locusts. Cubans of today, those of us who haven’t resigned ourselves to the snake’s nest that the government of our country has become, prefer to work for the sake of love of liberty, rather than because of hatred for those who repress us. Hatred is a bad fuel, only useful to jump-start broken steamrollers, not to move broken-dictatorship ideas.

And as an individual being who knew freedom in Cuba–where to be so is a thing of heretics–who knows freedom in the United States, and who will know freedom wherever I go, I say in Spanish of course:

I do not support the embargo that offers such an excellent excuse to the ruffians of the Island to justify their excesses; I hate the division of families, of friends, and it’s all the same to me if it is because of those who administer the Island like their own land, or if it is because of a congressman who believes in the right to tell me that seeing my mother once every three years is enough, and doesn’t understand the sweet favor he does to the Cuban satraps, dividing us more every day. And I don’t sympathize with Luis Posada Carriles, as I don’t sympathize with anyone who defends his beliefs through shedding the blood of innocent people.

From an honorable exile, from this Florida I have already learned to love, with humility, as a second homeland; from the same earth that welcomed Félix Varela, Martí, Heredia, persecuted and repressed Cubans; from this Miami that slanderers of my Island have tried to distort–with your invaluable help, of course: what would the Cuban defamation apparatus be without your collaboration, dear locusts; and from colorful, festive Miami, hybrid between the best of the Latinos and the spirit of the Land of Lincoln, I, a recent arrival with much to say and much to learn, dedicate my sovereign indifference.

At the end of the day, no matter how much racket you make flapping your arrogant insect wings, it will not be more audible.