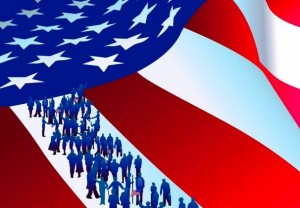 Havana, Cuba,November 2013, www.cubanet.org.– The Cuban Adjustment Act generates a lively controversy on both sides of the Straits of Florida. For the government it is the cause of indiscriminate exodus by Cubans to wherever, and for some of the exiles it constitutes the best escape valve which the regime utilizes to ease its tensions. Another sector inside as much as outside of Cuba considers it a means directed at protecting Cubans from a double abandonment: territorial and by the State.

Curiously this last sector is the only one that demonstrates a nationalist sense when defending the measure. In effect, protecting its nationals in any circumstance shows a vision and foundation that is appropriate for nationalism over ideology and that deserves to be applauded.

This regardless of abuses of the law.  It is true that we Cubans have been taking advantage of this law in two ways: as political refugees, which is not true in a great number of cases, and as a source of economic sustenance for our families, which explains why many Cubans avail themselves of the law to search for an economy that the Cuban regime does not permit to be built. And the effects, it is clear, have been debilitating.

And the appropriate response, on the part of the Cuban government, should be to to applaud a law that protects its own citizens. It should not appear that the United States protects Cubans more than their own State. No national State should protest when its citizens are well received by another nation. Especially when half of the resources with which it operates originate in the United States.

My analysis ends then with these two ideas: the political refugee category as much as the Cuban Adjustment Act deserve to be discussed but for reasons beyond those offered. The political refuge should be discussed so that it is granted to those who really deserve it. The Cuban Adjustment Law should be revised in light of the immigration changes that both countries have introduced in relation to Cubans.

That dual overhaul can facilitate an immigration regulation that answers the interests of both nations, the reality of family ties on both sides of the conflict and the protection of Cuban nationals in quite difficult economic and social circumstances. But to eliminate the Cuban Adjustment Act would be counterproductive for the legal control of the migratory flow. In the end, for good or bad, Cuba and the United States have shared and it seems will continue sharing a common special destiny. A fact that, paradoxically, the Cuban government itself recognizes when it implores, almost cries, for the elimination of the economic embargo, which is not a blockade.