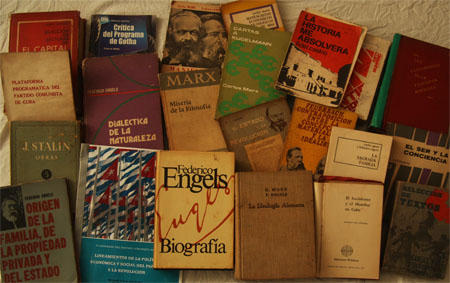 “The efforts to disseminate ideas that deny the vitality of Marxist, Leninist and Martí concepts, should be countered, among other methods, with a creative theoretical conceptualization of the possible conditions of socialism in Cuba as the only alternative with equality and justice for all.” Raul Castro, Santiago de Cuba, January 1, 2014

It’s rare that one finds a paragraph with so much substance with which to disagree. I would start by clarifying that what is countered should not be the efforts to disseminate specific ideas — something relatively easy to achieve with the traditional methods of confiscating books at the airports, blocking Internet pages, suspending telephone service or, as a final resort, unleashing the brutality of the rapid response brigades. No, the real challenge would be countering the ideas in question.

But the paradox is that, to reaffirm the vitality of the ideology that has “scientifically” proven the inevitability of socialism, one has to find a creative conception capable of theoretically sustaining the viability of socialism under current conditions in Cuba. Perhaps these paradigms of the century before last have lost their vitality and are now insufficient.

So as not to be too long-winded, I’ll pass quickly over the affront of equating the poet José Martí with Vladimi Ilych, which is like confusing love with hate or tolerance with resentment. What should not be passed over is that this pig in a poke is trying to set itself up as the only alternative offering equality and justice for all; and knowing the kind of equality and justice we can expect from such a system, we should be even less inclined to ignore it.

This is the second occasion on which the general who rules the country has launched an appeal to the intelligentsia in order to generate a foundation for what is already approved in practice, in this case the Guidelines of the 6th Congress. This should have been the work of the Party Conference (!) which, by the way, should have been held before the Congress.

This is forcing the master chef to swallow a rancid and badly chosen sauce and then asking him to write the recipe, as if it were an innovation, and all this to prevent the diners from enjoying the pleasures of new flavors.