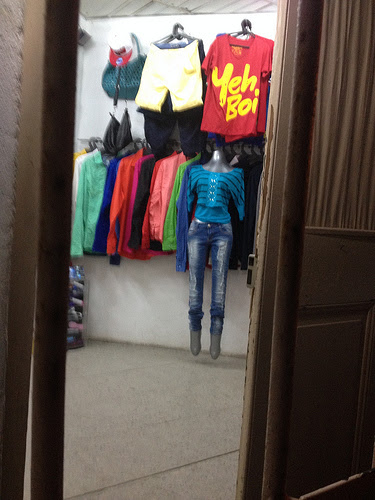 At midnight, she closed the door, turned off the lights, and ran her hand over the mannequins. December came to an end and with it her business in imported clothing. Like Helen, dozens of vendors all over Havana waited until the last minute of 2013 for some good news. But it never came.

The government maintained the unpopular prohibition against the sale of imported products. The deadline to liquidate the businesses in clothes and other accessories ended just as the twenty-one gun salute heralded the new year. Meekly, although muttering their annoyance, the proprietors of the so-called boutiques, collect their merchandise, take down their lit signs and advise their clients not to return.

The next day, along with the lethargy that comes after every celebration, the city also woke with a changed face. In the doorways where before the hangers flapped with shirts, pants and children’s clothes, there was nothing left. The rooms converted to dressing rooms had disappeared along with the racks which until last week offered sunglasses or scouring sponges.

Not a single vendor has challenged the order, not one has kept their stand open.

In parallel, there have not been any union meetings to demand compensation for the lost investments, nor protests demanding a permit that encompasses merchant activity. Not even the frequent buyers have raised their voices in solidarity with those who supplied them with cheaper, more modern and varied products than available in the state stores. All have remained silent.

The explanation for this frightened silence is obtained simply by asking. “Don’t worry, you’ll see that this measure will be rolled back,” some predict. Those believed to be well-informed because they have contacts in the government said, “In a few days they’re going to permit this and much more.”

The underlying message is chilling: “complain and it will be worse,” so “better to wait and not make problems.” Meanwhile, Helen has been left with her mannequins that no one looks at and with a four-figure debt.

The illusion of a possible step forward, slows the reaction to this step back. Those affected want to believe the State will rectify it. However, the real motive for such meekness is the fear of confronting power with their demands.