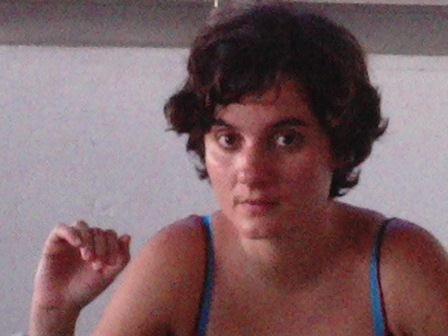 Especially in a country like Cuba, where there is an official voice and a chorus of frogs who, from diverse motives, croak on the same theme, to be a blogger could mean letting people know how you, personally, really take this reality that surrounds us on all sides within the Island and, in this letting people know, the hope that the fence will soon be broken, I have to believe.

Today I am celebrating being the owner of my own time to surf the Internet, to read other blogs, to read the comments on mine. If someone wants an approximate understanding of the euphoria I feel to have a piece of the Internet, you can listen to Avril Lavigne singing Smile, which I’ve heard and danced to with my daughter several times since it arrived in my house. Only today have I been able to interact with my blog, take its temperature, read the comments. And I want to write in response to these impressions.

First I greet Armienne, who has left me such sweet comments. Sexuality is a path. The whore is pure freedom of the feminine Eros. Thanks for letting me write the same poetry that I repeat, especially every Good Friday for the Beloved, and at the same time to remind you of the freedom of Cuba for Cubans.

I read the comments of a worker in the repressive Cuban apparatus, whom you attacked, and I appreciate that other commentators have defended you. What a pity not to have connected at that moment to also respond to the sad troll.

Armienne: When we women take our sexuality to the purest plane — for this we are more beautiful — we must cause great fear in some men who, for the same reason, become police and soldiers. They feel horror before the delicacy and feminine mystery, before the waning of the witch.

Our freedom lies in front of the vacuum, sexual knowledge of the absence, which some men can read as if it was prenatal, and these men do not become cops, or like destruction without rebirth and these men become soldiers.

This cop knows he cannot fill you up, and much less sing before your closed garden, persistent virginity, and so he attacks you. The curses we toss out in this plus-de-jouir — overflowing pleasure — make us so fiercely powerful that if they call us whores it doesn’t offend us (and we are only willing to barter it for the definitive love), and it makes these cops from the repressive Cuban apparatus on the Internet look at you, once again, like the ridiculous adolescents they must have been, full of frustration at their dependence on “the measures,” in which we, at the height of our whoring, become a great mystery.

Thank you to everyone who left me comments. Some have related situations in your lives in Cuba and this extends the significance of my posts and I feel like I am truly sharing them.

Freedom in Cuba is locked in an ideology, repressive in itself and violent towards others, that inhabits the conscience of so very many Cubans. Thus, I believe in the need to entirely involve God in this enterprise, and it will not embarrass me to repeat it even if it gives rise to critical comments. I know of what I am speak, and whomever has not experienced the vitality of having God as a friend and loving Jesus of Nazareth, I feel sorry for their loss.

Indeed, there was one commentator scandalized that I recognize myself as a Christian and yet I live my according to my own conscience and not according to the discourse of the Vatican. The day I understand that I’m offending God with some action in my life I simply divest myself of this action, because Christ for me is responsibility and so, freedom. There is no priest nor preacher between my Beloved and me, only the silent music, the sound of solitude, as the little friar Juan de la Cruz said, teacher of prayer and dissidence.

The theme of Cuba’s freedom is not bounded on the outside, its terrain is contained within every soul, every conscience. If I don’t write in my post when the night is darkest, the abyss most real, and death most near that the Holy Trinity will save me, I would be lying.

And after I had this dream, of Cubans caught in traps, repressed, and crushed by horses ridden by dark riders, and the Virgin at my side, the most beautiful woman in creation, told me that she knew only the names of those who suffered… as written in the Book of Life of the Lamb.

It turns out that I never found a greater sense of the Gospel than taking part, loving my neighbor suffering in the prison cells, beaten and repudiated in the streets by mobs led by State Security.

I write to the limits of my ability, I have to be me to believe that the wings of the butterfly united with the Universe can produce a change in the season. No more nor less than me in every post, secure in the Internet as if my life off-line that I will find my friends and of the day we will celebrate the freedom of Cubans, we will see each other in Cuba.