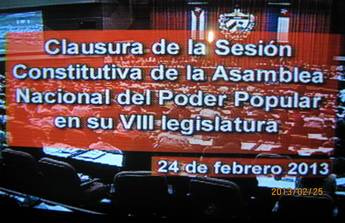 First things first. It is laudable that no member of the Council of State can serve more than two five-year terms in any one post, and that there is also an age limit on office holders. The re-elected President has also publicly stated that this will be his last term in office, and that the First Vice-President will be someone who does not belong to the generation of Cuban revolutionaries – the so-called “historic leaders.” Although this announcement has come somewhat late, people are welcoming the measures, taken after more than half a century of a one-person government with two faces, even though they will have to wait until 2018 for them to take effect.

On the other hand, to repeat yet again that socialism is irreversible, and that all that is left to be done is to perfect it, update it and save it when the majority of the citizenry consider it to be beyond salvation – especially in light of its demonstrable failures and inefficiencies over the course of more than fifty years – is not a pragmatic approach.

It is quite clear to everyone that its principles and dogmas, maintained through force, are the main impediments to real freedom and the development of productive forces, which are the only hope we have for overcoming the deep economic crisis in which we find ourselves.Nor is it useful, though it is now routine to do so, to speak of essential political and social changes necessary to save socialism. Instead, we should be talking about how to save the country, which is something much more important. In spite of some accommodation by the “historic leaders,” the principal levers of power remain firmly within their hands.

The changes in the offices of the President, Vice-President and Secretary of the National Assembly are merely cosmetic. Since the right to be elected as deputies is not granted to all citizens, no matter they may think, the Assembly is not representative of the full political spectrum of the nation. If it does not change the way it operates, it will continue to be more of a formality than a reality, a mere echo change for the state.

In short, the waiting game continues, now with a five-year extension.