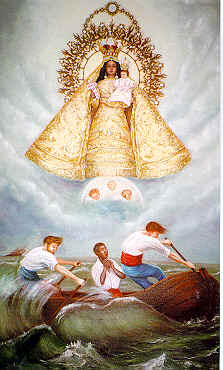 From her basilica in El Cobre, she watches us so we can be bathed in the love that she radiates. Three boats carried the Spanish conquistadors to the New World.  One of them – the flagship named Santa Maria – never returned to the Old World, it was destroyed on the island La Española.  So it seems that the Most Holy Virgin symbolized the desire to forever remain amongst our people, Marians par excellence.

Like all the nations in America, Cuba is also devoted to the Mother of Redeemer. Everything began in the beginning of the seventeenth century, when three men struggled after a storm in the Bay of Nipe in search of salt. A white radiance that appeared to them to be a bird flew over the ocean. When they got closer they saw a small image of Mother Mary floating on a tablet, with a sign that read: I am the Virgin Mother of Charity.

The miraculous event was not the finding of a dry image, after the storm subsided, they were able to go towards the ocean – as it was customary during that era – praying for protection against the bad weather. The miracle consisted in Maria deciding to unite herself forever with the Cuban people under the title of the Virgin of Love, because charity is love.

Soon her cult was propagated and venerated, and was present in all of Cuba. This devotion became part of the values of the people, it was the first steps to converting the nation, searching for their economic independence and social-political liberty.

The Mother of Charity went with her sons, the Cubans, against the Spanish. She appeared with her people together with the slaves, prisoners, and the Mambisa, the freedom fighters, and she died with each person who offered their lives to the country. But the new republic, full of hope and illusions, made the sacrifices not be in vain.

Members of the Liberation Army led by the general Jesús Rabí, lost the Saint headquarters who declared this Mambisa Virgin the Patron of Cuba. This suggested a new era in the small nation with a big heart. But the Virgin, saw dark and difficult days to come.

The hatred, the antithesis of the love that she preached, grew out of power and later from the men, in order to control their thoughts and actions. She started a battle between the well defined good and evil forces.

For interminable moments, later for years, the firing squad walls couldn’t hide the agonized and viril cries of its assasinated sons and daughters, yelling “Viva” to Christ the King.

The prisons grew so much that the archipelago had become a big prison. The Cuban has been persecuted, punished, beaten and humiliated, but the mantle of Our Lady of Charity of Cobre, never stops covering one alone, giving us all the room in her boat.

From her Basilica in El Cobre, she looks on us to be bathed in the love that she radiates, but she does not remain static, moving to wherever we are, whether it be among the heroes who died for their country, in prison with opponents and prisoners of conscience, in the streets and temples with the Ladies in White, repressed and beaten, with dissidents and protesters who have been hacked up, the boat people arriving and the many who fall prey to the wretched sea, or as the alter ego of combatants who clinged to the gun and who still aspire to her as a means of redemption.

Mother! Watch your children suffer from a cruel tyranny, give us a place in your boat to protect us under your mantle to be with you and your love, and help us build hope “… with the help of all and for the good of all,” a proud country, sovereign, democratic, founded in truth, justice, love and freedom.