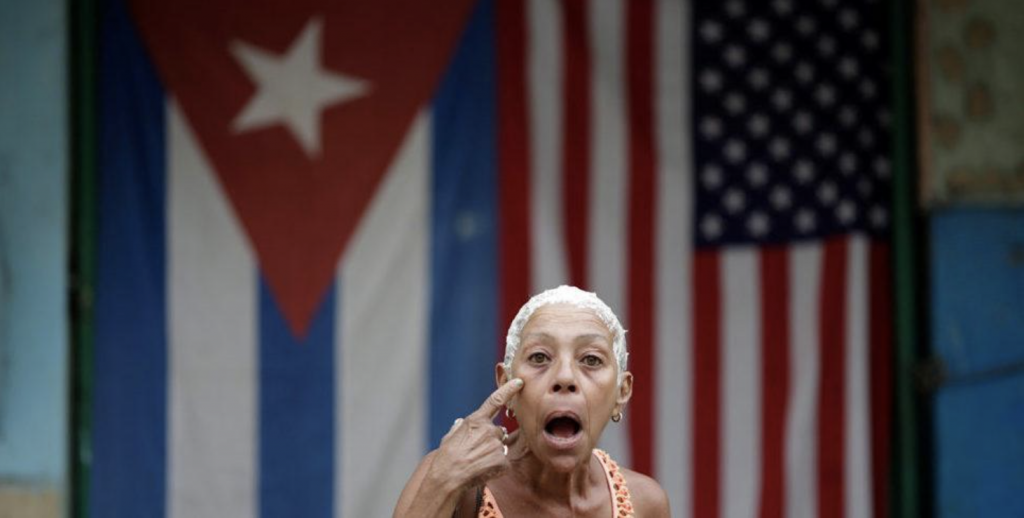 Dimas Castellano, Havana, 23 May 2021 — The embargo enacted by the U.S. against the Cuban government in 1962 was ridiculed for its ineffectiveness until the Soviet subsidies disappeared. As of that moment, it was described as the primary cause of all ills, including sexual rights, according to the words of Manuel Vázquez, Deputy Director of CENESEX, on May 13, 2021. Since then, year after year, Cuba has presented resolutions before the United Nations General Assembly to force its elimination.

When Cuba presented the first resolution in 1992, 59 countries voted in favor. In 2016, with diplomatic relations re-established, it presented the twenty-fifth resolution, without a single vote against it, since Israel and the U.S. abstained. With those results, the maximum possible at the UN, it exhausted the resolutions route, as compliance with them is not mandatory; at the same time a new scenario was launched with the Obama Administration.

In contrast with the ten administrations that preceded it (Dwight D. Eisenhower to George W. Bush), Barack Obama did not demand as a premise the democratization of Cuba. In its place, he expanded travel permits, eased commercial restrictions for private enterprises and smallholder Cuban farmers, increased the limits on remittances and donations, expanded commercial exports of goods and services and provided commercial telecommunications and internet services at low prices.

These measures resulted in increased travel to Cuba, the arrival of cruise ships, the resumption of flights and direct mail transport, the establishment of agreements with telecommunications companies, and negotiations between other countries and Cuba. For its part, the Government of the Island limited itself to allowing Cubans to travel abroad without requiring permission from the Government, and to sell their cars and houses; measures indicative of how far Cuban rights had declined, but nothing that favored their empowerment.

In that context, during his electoral campaign, Donald Trump announced that he’d revise the established policy toward Cuba. Once elected, in June 2017, he signed the “National Security Presidential Memorandum on Strengthening the Policy of the United States toward Cuba.” And in November of that year, the Departments of Treasury and Commerce, through their offices of Foreign Asset Control (OFAC), and the Bureau of Industry and Security (BIS) rolled it out.

Lost was the opportunity to negotiate; in 2017 the Cuban government presented the twenty-sixth resolution against the embargo and criticized the National Security Presidential Memorandum. That line, which was not edited in 2018, 2019 nor 2020, will have a new episode next June when Havana presents its thirtieth resolution with the same arguments, “the blockade is illegal, immoral and constitutes a major obstacle to Cuba’s economic and social development.”

A different point of departure requires one to consider two of the primary reasons for the embargo: the elimination of private property in Cuba and the guerrillas in Latin America.

The first began by eliminating the large estates (1959), it continued with the elimination of properties owned by large American businesses (1960), and it ended by sweeping the tens of thousands of small establishments that had survived the wave of confiscation (1968).

The second reason manifest itself since the first days of the revolution with the training of guerrillas to export the revolution, the first episodes of which took place in Panama, Dominican Republic, Haiti, Nicaragua and Paraguay.

Both events, by affecting American interests, resulted in the rupture of diplomatic relations and support for the Bay of Pigs landing in 1961 and the embargo in 1962.

The actions and reactions of both parties resulted in a confrontational escalation which included the installation of Soviet mid-range missiles in Cuba and the naval blockade in 1962, and other actions to date.

In the midst of this confrontation rights and freedoms, which reached their peak in the Constitution of 1940, and placed Cuba among the countries with the highest standard of living in Latin America, disappeared from the Island. With power concentrated in the leader, power in the State and independent civil society replaced by one created and subordinate to power, inefficiency took shape. The government response was limited to introducing reform measures with a predetermined border: state property, the single party, and the conservation of power; which are the primary causes of the Cuban nation’s structural crisis.

The hopes of the Island’s authorities for a change in policy with the new administration in the U.S. are gone with the wind. Four months since taking office the message from Washington has been, “Cuba is not a priority for the U.S. any change goes through human rights and the Biden Administration is not Obama’s.”

After proving that the Cuban government cannot determine the U.S. policy and that resistance has its limits, only one path remains: internal change.

The U.S. does not prohibit dealing with private Cuban business owners. Thus, if the Government of Cuba allows its citizens to legally create small and medium enterprises; hand over or sell land for use by producers; eliminate the monopolies held by Acopio and Comercio Exterior so that Cubans may freely buy and sell; eradicate the Foreign Investment Law so Cubans may invest in their country, then the enomony and services would gradually eradicate the shortages. . . But most importantly, the arguments for maintaining the embargo would be dismantled and the U.S. Congress would be free to proceed with eliminating it.

The Cuban authorities, instead of continuing to present resolutions, could do what is within their reach: eliminate the ideological or other obstacles, stop clinging to nationalization, centralized planning and the absence of freedoms which constitute the primary reasons for the Cuban crisis. It is not about an act of surrender before the “enemy”; but rather a gesture toward the nation and toward the people the Government supposedly represents. It would be like adding content to the cliché “thinking as a country.”

It has nothing to do with utopia. The U.S. unleashed upon Vietnam triple the number of bombs used during World War II; 15% of the population perished or was wounded; 60% of towns in South Vietnam were destroyed. At the end of the war, Vietnam faced a U.S. embargo. Instead of presenting resolutions at the U.N, Vietnam introduced a market economy. As a result, the embargo was lifted. In 2010, Vietnam achieved its goal of joining the group of middle-income countries; in 2014 it was the twenty-eight largest exporter in the world; and in 2016 it was en route to becoming an industrialized nation.

If the Cuban government did not take advantage of the opportunity offered by the Obama Administration and the economy continues declining, why don’t we think like a country and as a result eliminate the internal blockade? What is the reason for not doing so?