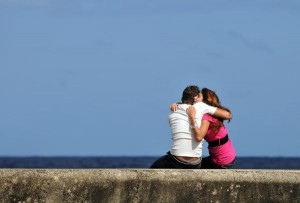 HAVANA, Cuba, December, www.cubanet.org — Between 1977 and 1978 Cubans living in the United States were able for the first time to return to the island to visit relatives. When my great uncle and great aunt came to our house, my father, who was an official in the Revolutionary Armed Forces (FAR), could not be present. As a member of the Communist Party and the armed forces he had to obey orders, which were to refuse to greet them.

I remember as a child that my aunt and uncle stayed for lunch. There were tears in my aunt’s eyes when she saw the steaming, aromatic pot of black beans placed on the table. She said that, since she had left Cuba, she had not had beans and rice like the kind they make here. She later asked that we accompany her in a prayer of thanks. Even my uncle, who was not very religious, joined in — something I was only able to full understand years later.

In 1990 a group of students were returning home from Poland on a Cubana de Aviación flight. During a layover in Gander, Newfoundland almost all of them decided to take advantage of Canada’s then-generous asylum laws. More than twenty years later a member of the group was returning to Cuba as a tourist. He was travelling in economy class and his flight had several unscheduled layovers before landing at the Holguín airport.

His friend told us that during the last leg of the trip he managed to fall asleep. When they opened the hatchway door, a burst of steam and the penetrating odor of wet grass and rotting trash told him he had arrived in Cuba. This smell, so familiar during his childhood and adolescence, had been almost forgotten during the two decades he had lived in Canada.

At the moment they opened the hatchway door, all the memories came rushing back. An overwhelming sense of joy and sadness came over him. Later, surrounded by the love of family and friends, he managed to momentarily overcome this feeling. While in Banes he saw traces of the town’s devastation, the result of three hurricanes: one in 2008, another in 2012 and the main one, which has been destroying it since 1959. He also passed the homes of his childhood friends. Many were gone. The facades of others have or had been defaced with signs and placards stigmatizing their owners for opposing the government.

Recently, a young woman who was my first wife and one of my best friends in adolescence was visiting. She said, “Everything is more or less the same as when I left, but the decay of the houses and the people is evident. Now there are hard-currency stores for people with money, but the anguish and resignation have become became endemic.”

While we were having a beer to relieve the noontime heat, my friend used her mobile phone to show me the exact moment that she lost her internet connection. “I was chatting on Facebook and suddenly the whole screen froze. Then someone came up to me and said we were arriving in Cuba.”

She also told me, “I cannot understand how it is possible to feel nostalgia for a country where time has virtually stood still, like the image on my cell phone. It hurts me every minute, every house I knew from childhood that no longer exists, because it has been destroyed, because the rice dish of rice with black beans seems so different to me here. It feels like I am going back into my past, like I’m going to a cemetery to transfer a beloved family member from the crypt to the ossuary. ”

She took my hands and squeezed them hard between hers. It was as if she were trying to cling to nostalgia, drifting between love for what was and homelessness. Then we closed our eyes and let ourselves go.