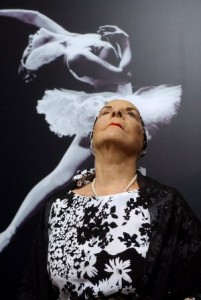 With the Gala of the National Ballet of Cuba for the 80th anniversary of Alicia Alonso’s stage debut on Thursday, December 29, and the presentation of the Nutcracker on Sunday, December 1, the Gran Teatro of Havana closed its 2011 season and inaugurated its 2012 programming.

The super spectacle of Thursday was the touchstone of the great Diva of Cuba, who received dozens of honors during the year end, devoted to praising her legacy as a dancer and choreographer on the occasion of 90th birthday of her birth, which took place in Havana in 1921, and her artistic debut at the Auditorium, the current “Amadeo Roldán,” in the distant year of 1931.

As Alicia has witnessed almost one century and the beginning of another, she had the good fortune to hear — she can no longer see or walk — the documentary that contains the highlights of her long career stage and the audience’s applause for the interpreters of eight pieces with her own choreographic versions.

Among the choreographies were Sleeping Beauty — with the great waltz in the first act — Excuses, Naked Light of Love, inspired by the poem of José Lezama Lima, Preciosa and the Wind, based on poems by Federico Garcia Lorca; Twilight Falls, Dialogue at 4, The Magic Flute, which recreates passages of Mozart’s strange opera, and the Gottschald Symphony about the European composer.

The choreographic passages of Doña Alicia, who still heads the National Ballet of Cuba, from which she excluded Fernando Alonso — her ex-husband and first dancer who accompanied her in her glorious beginnings in New York — demonstrate her total commitment to the art of dancing and will remain in the collective memory.

In both the anthology program on Thursday, December 29, about Alicia’s stage debut, as well the representation of the Nutcracker on Sunday, January 1st, the Maestro Giovanni Duarte, director of the Orchestra of the Gran Teatro of Havana, shone, along with the classical virtuosity of young soloists from the National Ballet, such as Viengsay Valdés, Sadaysi Arencibia, Irene Rodríguez — first figure of the Spanish Ballet of Havana — Anet Delgado, Ariadna Suárez, Luis Valle, Arián Molina and others.

Alicia Alonso triumphed in the American Ballet Theater in New York in the forties of last century and founded in Havana, in 1948, the Alicia Alonso Company, the genesis of the Ballet Nacional de Cuba, founded in 1959 with government support. Since then she revolves in the pantheon of Island dance with divine status and absolute command.