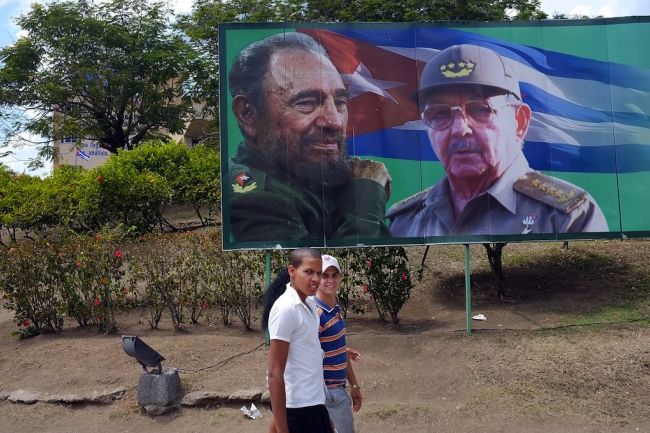 January 1, 2013, the Castro brothers’ autocracy turns 54 years old. That leaves 20 years in order to equal the duration of a Communist Party in power, the CPSU, in the former Soviet Union.

Only North Korea, China, Vietnam or Mexico with the PRI, have been governed longer with the same party. In the succession of its governments, Cuba is comparable to North Korea. With the difference that the Sungs have governed since 1948. It is true that on the island the impressive cult of personality that exists in red Korea is not practiced. But what has made us emulators of the North Koreans has been the continuity of power in a single family. No other communist state has created a dynasty.

Fidel Castro is the indisputable leader of the Cuban Revolution. Founder of the July 26 Movement, no one — or few — knew who he really was when he entered Havana on January 8 of 1959. From his turbulent past, some historiansidentified him as a gangster gunman in his years as a university student.

If he was a Marxist, he never practiced the ideology openly. He did not serve in the Popular Socialist Party. Nor in his letters or dialogues with friends from that period has his support or admiration for the Soviet cause been demonstrated. More likely he was a home-grown guy. Future history will tell us what was his true motive for turning 180 degrees in his democratic and liberal discourse of 1959 and making a giant leap, enlisting in the socialist bloc of eastern Europe.

Anyway, Fidel Castro is a quite anarchic Marxist. At his whim, he conciliated the discourse of the humanist Jose Marti and the quotes of the general Antonio Maceo. And he tried to give his support to the Communist ideology bypromoting and supporting with weapons and money the armed struggle in Latin America and Africa.

Despite Castroism not being a recognized ideology or doctrine, nor existing a text that explains to us what it deals with, in Cuba its followers call themselves “Castristas.” A dangerous cocktail of fanaticism, authoritarianism and personal loyalty. If the leader, as they still consider him, tells them they should mobilize for a war against gringos, here go his partisans to build anti-aircraft refuges and to train with AK-47s. In his name and his revolution, thousands of Cubans were disposed to immolate themselves in the missile crisis of 1962. Or they departed for unknown places in Angola and Ethiopia and involved themselves in civil wars.

For the official discourse, Fidel Castro is synonymous with Fatherland. Whoever opposes him is a traitor and can go to jail. Then in 2006, because of illness, Fidel saw himselfforced to cede power to his brother Raul, a clear dynastic intention pervades the air of the Republic. If the sons and nephews of Castro I, in appearances, are not installed in the estates of power, the offspring and relatives of Castro IIdo have intentions of controlling the State.

Now the brothers from Biran are two grandfathers, 86 and 81 years of age, in full retreat. Cuba’s luck will be decided in the next decade. Maybe sooner. The economic monopoly exercised by the military entrepreneurs and the control of special services by Raul’s son Alejandro Castro Espin permit glimpses of the succession within the power apparatus.

With an illegal, hounded and weakopposition, the designs and plans of the Castro brothers to “perpetuate their revolution” are not preposterous. It remains to be seen how long Castroism is capable ofsurviving when its creators no longer live. It is complicated to make predictions about Cuba’s future. It’s the same for an unexpectedsituation changing the path of the island towards democracy, so in 2059 thousands of Cubans may gather in the Plaza in order to celebrate the 100th anniversary of the revolution.

January 1, 1959, few on the island and in the world thought that a bearded young man of 32 years of age and his retinue of guerrillas would occupy power for the next 54 years. No statesman or dictator in the 20th century governed as long as Fidel Castro. A world record thatnow belongs to him.