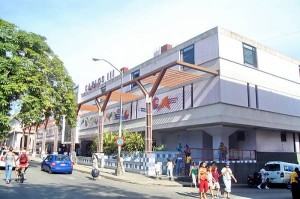 HAVANA, Cuba , September ww.cubanet.org – It’s Saturday , it’s six o’clock, and Anaydée is with Carla, her young daughter, in the “children’s play area” of the well-known Carlos III Market in Central Havana. Whenever she cans she takes some of her savings to please the little girl, letting her climb on the machines with coin slots which, for 25 cents in CUC, for a few brief moments sway and shake the lucky kids whose elders can afford the “luxury” of paying for this ephemeral diversion. A handful of electromechanical devices delight the children while taking a bite out of the pockets of their parents and grandparents. After all, 25 cents for a child’s smile seems a modest price.

The Carlos III shopping center is probably the best known and busiest of all those selling in hard currency in the capital. It may be the most “popular” in Cuba, judging by the presence of customers from all provinces circulating through it every day, especially on weekends.

A reduced tropics-communism version of the typical mall of market economies, nestles in one of the populous municipalities in Cuba; this is a key point in the hectic human traffic in the city. It could be raining, hot, cold, or threatening a hurricane, but the Carlos III market is never empty, which is justified perhaps because – despite the insufficient and almost always deficient offerings, or the poor customer service – a variety of services are concentrated there: cafeterias, department stores, food market, hardware, travel agencies, Western Union services and children’s play areas, among others.

So Anaydée, resident of the same municipality, a working single mother who has little time to devote to the entertainment of her little girl, visits the children’s section of the commercial center every time her collateral economic activities (illegal sales of clothes and other articles) allow her to shoulder the extra costs for Carla to enjoy the longed-for “machines” and for them to share a light meal together.

But recently Anaydée told me of her worries about what is happening in the Carlos III “playground.” She thinks this place is not the most suitable for children. The equipment for the entertainment of the kids is nestled right in the midst of a veritable cattle trough for adults: a bar and two outlets for beer and other alcoholic beverages are the environment that welcome the little cars, horsies, games and other kiddie distractions, such a chaotic and promiscuous mixing that it’s literally impossible to isolate children from the vulgar drunken mess and every kind of debauchery that comes together in that area. Anaydée is sure that “something is being violated” there.

While, if in Carlos III the children’s play areas seem designed for the comfort of the families that make their purchases at the mall, with food service included, the truth is that it has become a food-and-drink-trough for the most diverse moral collection, where decent families are involuntarily mixed with marginal types who provide the environment with a dose of vulgar attitudes and filthy language.

So, the kids who enjoy the games are subject to inappropriate conversations and every kind of unpleasant situation between the surrounding adults, many of them completely inebriated, while others consume alcoholic beverages and smoke very close to minors. The situation tends to get worse as the evening progresses. Just visit the area between 7:00 and 8:00 at night, primarily on weekends, to detect the bad atmosphere that reigns there, derived from the social detritus that concentrates to consume the fruits of its illicit dealings, including narcotics trafficking and prostitution. The Carlos III shopping center has many faces.

Usually, even in the Castros’ Cuba, recreation places intended for children have prohibited the sale of alcoholic beverages. A measure consistent with the principle that children should play in a morally healthy and exemplary environment. Such is the case, let’s say, of the playgrounds adjacent to La Maestranza and the Havana Amphitheater, in the Old Town.

However, the compulsive urge to “collect hard currency”* is an interest that overrides the moral formation of our children, so the management of Carlos III—I’m not aware of others—doesn’t seem very committed to the official call to “rescue the missing values.” It’s about guaranteeing sales, the rest doesn’t matter very much. After all, we are talking about a place in Central Havana… Has anyone seen a General in Carlos III Mall

Translator’s note: State-owned stores that sell in hard currency (the so-called Cuban convertible peso, or CUC) versus national money, also known as the Cuban peso, are formally called “currency collection centers.” One of the ways the regime “collects” much of the money sent to Cubans by their families overseas, is through selling goods, only available in these “stores” at greatly marked-up prices.