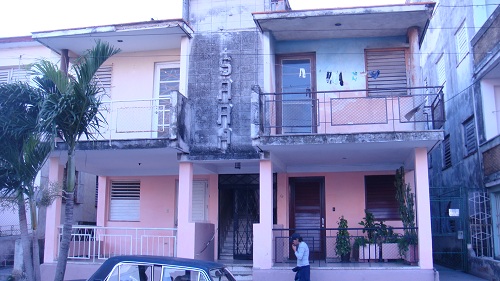 If you want to know the soul of the Cuban people, you must live in a solar or tenement building. That’s where you’ll find diversity. Stories of prostitutes, pimps, gays, hustlers, thieves and dissidents.

I invite you to visit a building in the Havana neighborhood of Lawton. It consists of a ground floor and an upper floor with a total of with apartments, some larger than others. Four interior and four exterior terraces on the street.

It was ordered built in 1957 by Rosara, a pharmacist originally from Galicia. After saving coins and crumpled bills under his mattress for years, the Galician decided to take a leap in his life and become a landlord.

The idea was good, but times were bad. It was inaugurated in 1958. A year later, Fidel Castro and his bearded ones took over and did not take long to nationalize factories, sugar mills, refineries and buildings. Rosara could never recover the money he invested.

It’s been 53 years. The facade of the building has not been fully repainted. The letters R and O have fallen off and it reads now only SARA. But compared with the 19-century filthy tenements in the old part of Havana, which collapse under a passing shower or medium-intensity winds, Rosara is a five-star hotel.

I present to you its tenants. Along a narrow hallway four families live. A mother with three children, unemployed and mentally imbalanced, eating whatever comes along and living like a gypsy.

In another apartment, a neighbor devoted to Santeria. Above, a couple of old people loyal to Castro. In their old age they survive on their retirement checks and remittances sent from the United States.

Next, a family maintained by their daughter. From Europe, she sends euros, so they can eat two meals a day and sleep with air conditioning.

In one of the apartments on the ground floor with a terrace, lives a couple with good manners and a son in college. Next, the classic generous type, who constantly disturbs the neighbors to offer his various trades. On the top floor, a specialist in sports statistics, serious and quiet.

It is a building where people usually say good morning, something rare in the island. And they do not ask for money, or to borrow sugar or rice, as is customary in most rooming houses and buildings of the capital.

Nor do they often have violent family quarrels over trivial matters like who ate the bread the brother got on the ration book, or who sold the parents’ egg ration, which have occasioned more than one bloody encounter in the country.

The building Rosara is a piece of Cuba today. Neighbors who have gone into exile, people who disagree publicly and good workers who answer summonses from the government.

The final tenant lives in one of the apartments above. He is a freelance journalist and has two blogs. For two years he’s trying to repair his floor. One day he wants to live with his daughter and his wife.