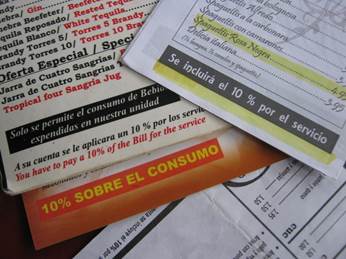 Fernando Damaso, 9 October 2016 — in any restaurant and some cafes in Havana, be they state-run or private, “10% is added for services,” according to a little notice in Spanish and English in fine print on the menu. That is, the prices of the menu items are false, because the final cost is 10% more than what they say. This monster, widespread, is a real epidemic.

Why does that exist here, when it isn’t present in any other country and is a source of wonder and concern for us and for those who visit us.

During the Republic it never existed. If you were satisfied with the offerings and satisfied with the service, you voluntarily left a tip, as a bonus to the person who served you and sometimes, even for the cook This is the current practice throughout the world.

The monstrosity arose after 1959, when the “intelligent” and preoccupied Minister of Internal Trade by the name of Luzardo, understood that the tip was on offense to the food worker who received it, because under socialism it was his duty to provide good service to his “brother workers,” without any type of compensation above his salary, and decided to abolish it.

In the face of the protests of food service workers, because at that time they received more in tips than in fixed salary, like Solomon they established a 10% obligatory charge on top of th food, which was shared equally by everyone in the establishment. The result could not have been worse: poor quality food, and worse service, turning customers into ill-treated users.

The state monster, with the reappearance of private establishments, mechanically transferred the patter to them and today it is widespread, with the aggravating circumstances that, the server, who brings the bill, already loaded with its 10% tip, smilingly waits for his or her own tip.

So far, very few state administrators and private business owners have had the courage to eliminate it, preferring to maintain this absurd and unjust source of extra earnings and an expense to their customer’s wallets.

I, at least, when I go to a restaurant or cafe where it is applied, do not leave an additional tip, because I think they are already charging me, independent of the food and service, although they look at me strangely and consider me stingy. To one, the other!