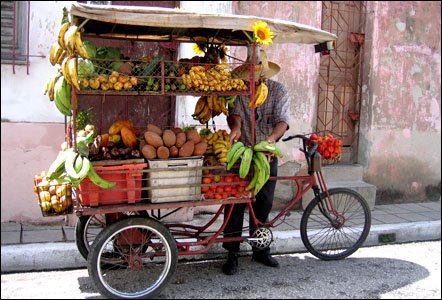 This morning I went with my friend Magy to buy some bananas and ingredients for us to make a nice salad. We stopped at the EJT (Ejército Juvenil del Trabajo or Youth Labor Force) farmers’ market. We did not find anything worthwhile but we did overhear a conversation between two quite elderly men we recognized from our neighborhood.

One was saying to the other, who was dressed in military fatigues and boots in spite of being well into retirement age, how expensive and bad Cuban-made cleaning liquid was. The one in boots, raising his voice so those of us present could hear, replied, “No, it’s good. I just bought some here, and it came sealed and everything.”

“Listen, don’t be blind,” the other one said. “They dilute this stuff at the factory. And instead of the three pesos it used to cost when it was good and thick, it now costs twenty-five. Don’t you realize they are robbing you?”

The other gentleman, who could not contain himself after such an utterly idiotic remark, said, “Look, my friend, I don’t want anyone stealing anything for me, much less the state. It’s like when they tell us they are giving us health care and education for free. It’s just one more excuse and a fable no one believes anymore.”

In the midst of this my friend came over, took me by the arm and said, “Enough of this. I have something more interesting to show you.”

She led me past shelves to a pushcart vendor, who was selling some very attractive avocados and enormous bunches of bananas. As we were shopping, we saw an elderly lady coming towards us. She was carrying a transparent nylon bag. Inside was a pair of pink slippers, which looked to be quite nice. She approached us shyly, offering them to us for only five CUC.* Suddenly the boy who had been waiting on us grabbed her package, turned to us and said, “I saw them first. And, besides, they are my girlfriend’s size. So, sorry, ladies, but the slippers are mine.”

We left, “our sides splitting” with laughter, but not before having to wait for the vendor to buy the slippers from the poor lady, who also wanted to buy some produce, before completing our transaction. “That’s socialism for you!” I told my friend.

*Translator’s note: Five CUC is slightly more than five dollars US at the official exchange rate.