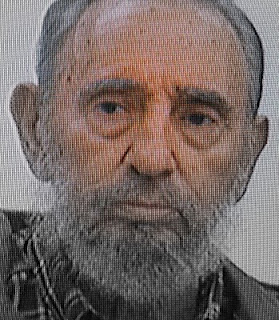 Where is the shame, dignity and honor of the commander in chief of the Revolution? In his column in the Granma newspaper today, he has reflected on the Summit of the Americas, their perfidies and Machiavellian calculations of power, expressed in a lexicon as worshipful of politicsas it is absent of justice and love for the unfortunate people of Cuba, a country that has been denied the right to participate at the Summit.

He returns to betraying the most basic codes of ethics with respect to the human condition, envious by nature and cynical in his essence, as well as failed, in his miserable attempts to highlight the need for peace while subtly encouraging warring conflicts among South American countries.

He does not reflect, not in a single word, on why Cuba has been denied the right to attend. Cowards lack the virtue of honesty, if the comandante had any he would be obliged to deal with the agreements signed by him and the Cuban State and also broken by him and the Cuban State, from previous summits. He would have to face up to the audacity and cheek with which the presidency and the governing Communist party have mocked, not only the accords, but also the presidents who have attended the summits and the people they represent.

But such is absolute power, and what’s worse is that some governments, like Venezuela and Ecuador, have allied themselves to this desicable betrayal of the rights of peoples to be respected as human beings. It emphatically highlights the fact of their not taking seriously the agreements on Cuba, the Falklands, and drugs. “What about the agreements?” I would ask the great comandante and the world, which should pay attention to Cuba -which doesn’t respect the signed pacts and human rights which are violated in every way by the government. If they were to enter into another agreement after all that, it would be the most wicked and villainous betrayal of mankind.